The National Bank of Ukraine has issued a new commemorative coin marking an historic battle which for Ukrainians is a cornerstone in their earlier history and paved the way for a more independent state. The Battle of Orsha which was fought on the 8th September 1514, in which a Lithuanian-Polish alliance halted the offensive of the grand prince of Moscow, Vasily III Ivanovich, was an event of great international importance, more so, for the immediate region. The army which repelled an offensive from Moscow included the Army of the Grand Duchy of Lithuania, led by Prince Constantine Ostrog and also consisted of Polish, Lithuanian, Ukrainian and Belarusian troops.

The Battle of Orsha became part of a long series of Muscovite–Lithuanian Wars conducted by Russian rulers striving to gather all the former Kievan Rus’ lands under their rule. Shortly after dawn on the morning of the battle, Ivan Chelyadnin, the commander of the Russian troops, gave the order to attack. The Russian forces attempted to outflank the Lithuanians and Poles by attacking their flanks, which were manned by Polish, Lithuanian light hussar and Tartar troops. One of the pincers of the attack was commanded by Chelyadnin personally, while the other was led by Prince Mikhail Bulgakov-Golitsa, a member of Lithuanian House of Gediminas. The initial attack failed, and the Russians withdrew toward their starting positions. After the defeat of Russia at the Battle of Orsha, Chelyadnin was taken into captivity and died in a prison in Vilnius. 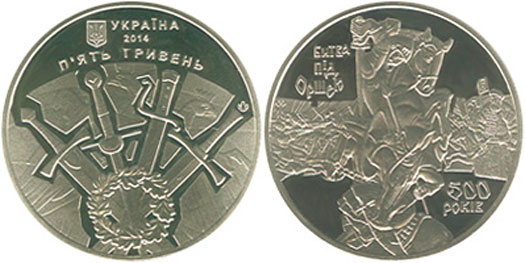 The coin, designed by Volodymyr Taran, Oleksandr Kharuk, and Serhii Kharuk is struck at the Mint of Ukraine. The obverse design includes the state emblem of the Republic of Ukraine to the right of which the inscription “UKRAINE” is placed. Under the emblem is year of issue, “2014” and the coin’s denomination of Five Grivnia. In the center is a composition of four swords, symbolizing the militaries of the four nations of Poland, Lithuania, Belarusia and Ukraine. The crossed swords form a crown along with a wreath of oak leaves – a symbol of military glory and victory. The mintmark of the Ukranian Mint is placed to the right of the primary design. The reverse of the coin depicts elements of a symbolic battle song, and written on pieces of cloth entitled `Battle Orsheyu` which was created by an unknown member of the battle. To the right, a depiction of Prince Constantine of Ostrog is seen along with a stylized inscription “BATTLE ORSHA” at the top left and “500 YEARS” to the bottom right.

The coin is available from regional sales offices throughout Ukraine, their locations can be found at: http://bank.gov.ua/control/en/publish/article?art_id=114008&cat_id=114002 For more information on this and other coins issued by the National Bank of Ukraine, please visit their website at: http://bank.gov.ua/control/en/currentmoney/cmcoin/list where you can find a comprehensive list of all coins issued since 1995. Information offered in English & Ukrainian.