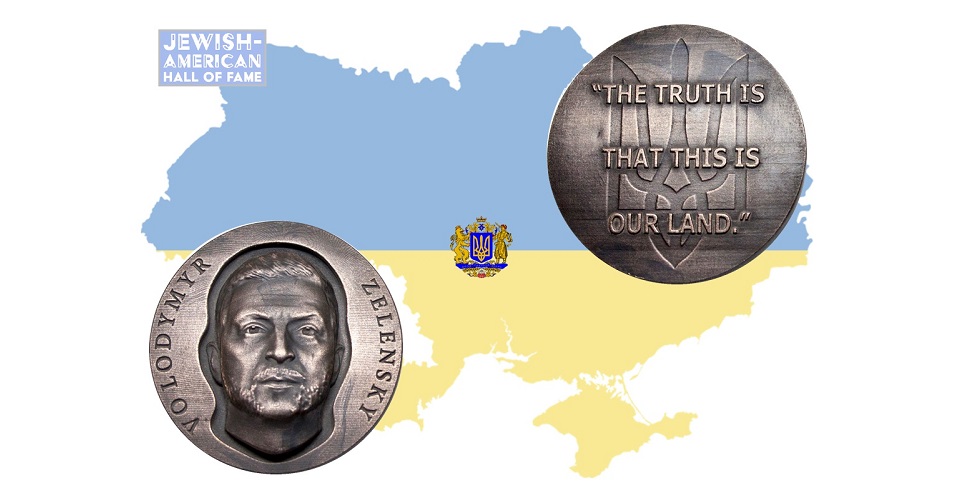 The non-profit Jewish-American Hall of Fame and its director, Mr. Mel Wacks, have commissioned Jim Licaretz, a former sculptor-engraver at the United States Mint, to create a bold and heroic medallic portrait of Ukraine’s valiant president, Volodymyr Zelensky. The image is featured on limited edition 3.5-inch (89-millimetre) art medals, which are being offered to the public as part of a fundraising project. The Jewish-American Hall of Fame has also announced, as part of the project, that 100% of the profits will be contributed to aid the embattled Ukrainians in their homeland and as refugees.

Following the unprovoked invasion and attack of the Ukrainian Republic by Russian armed forces orchestrated by the Russian president beginning on the 24th February, President Zelensky has received countless messages internationally for his bravery and resilience. The ongoing brutal war has already seen the deaths of thousands of innocent civilians and caused a massive wave of refugees seeking safety. The situation is dire, besieged towns and cities have been reduced to rubble and unfit for habitation due to the endless shelling and constant barrage of bullets from Russian soldiers. Despite the heroic defence of the country by the Ukrainian army, as well as brave armed civilians protecting their homeland, many have fled their homes and are now seeking safety in neighbouring countries and further afield. The fighting continues and the crucial need for relief assistance by Ukrainians both in and out of their country remains a priority for many governments and non-government agencies alike.

President Zelensky’s own personal life story is as inspirational as it is fascinating. Born to Jewish parents on the 27th January 1978 in the city of Kryvyi Rih, in the former Ukrainian Soviet Socialist Republic, Volodymyr Oleksandrovych Zelensky’s great-grandfather and his three great-granduncles died in the Holocaust. Zelensky earned a degree in law from the Kyiv National Economic University but decided to pursue comedy instead of a legal career. He created a company that produced films, cartoons, and TV shows, including the TV series Servant of the People, in which Zelensky actually played the role of the Ukrainian president. In a turn of fate in which life did indeed imitate art, Zelensky at the age of 41 surprisingly won the Ukrainian presidential election in 2019, with over 73 percent of the popular vote. According to Ukrainian and foreign intelligence services, the enemy has marked President Zelensky along with his immediate family as their number one target. The president, his wife, and his family have chosen to remain in Ukraine. 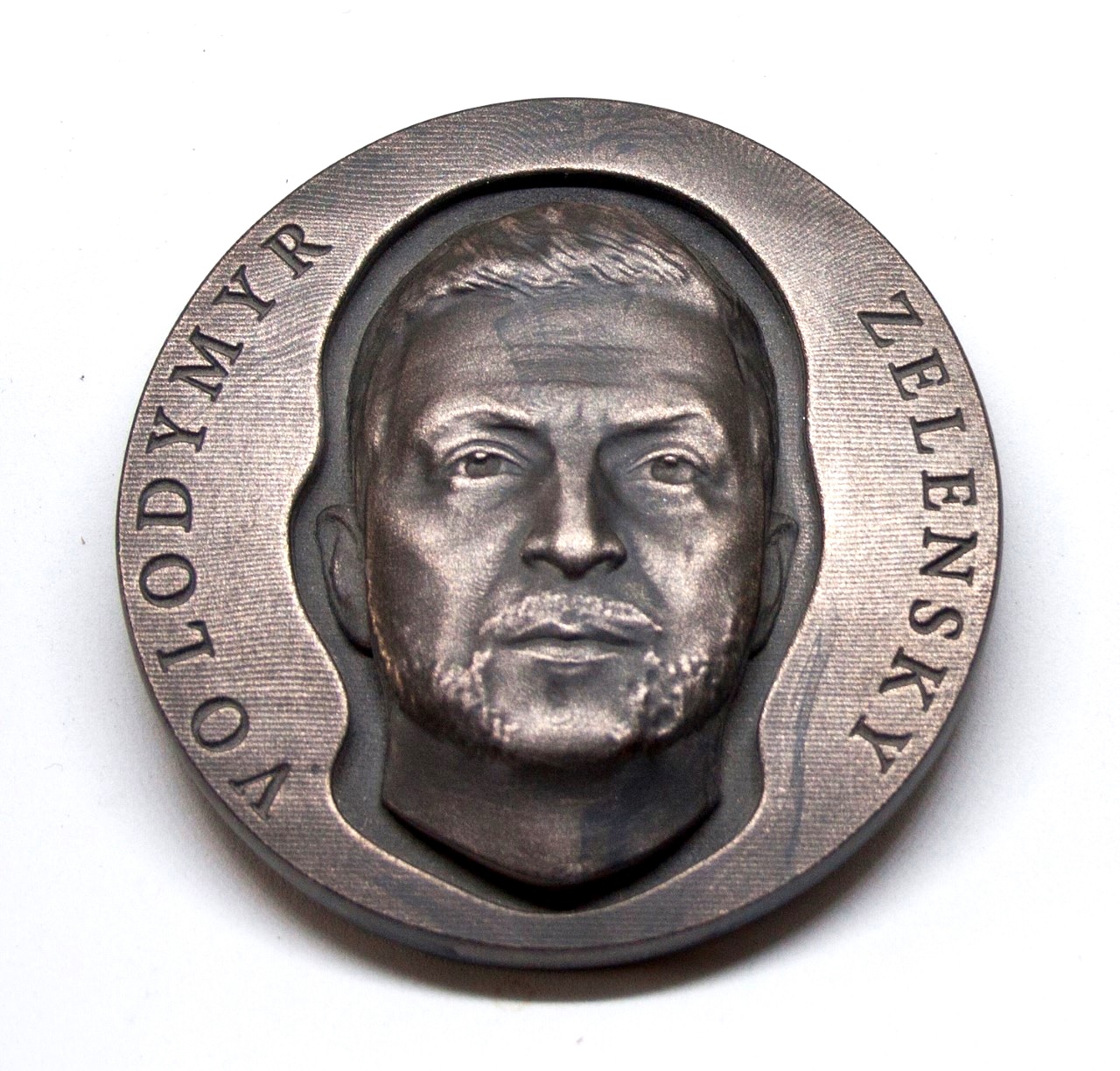 President Zelensky’s front-facing image showing a determined expression featured on the obverse and recessed onto the surface along with his name VOLODYMYR ZELENSKY incused in Roman letters. He is looking straight ahead as if he were facing a news camera in the same manner he has done countless times while addressing his countrymen, encouraging them to remain steadfast and to continue defending Ukrainian land. 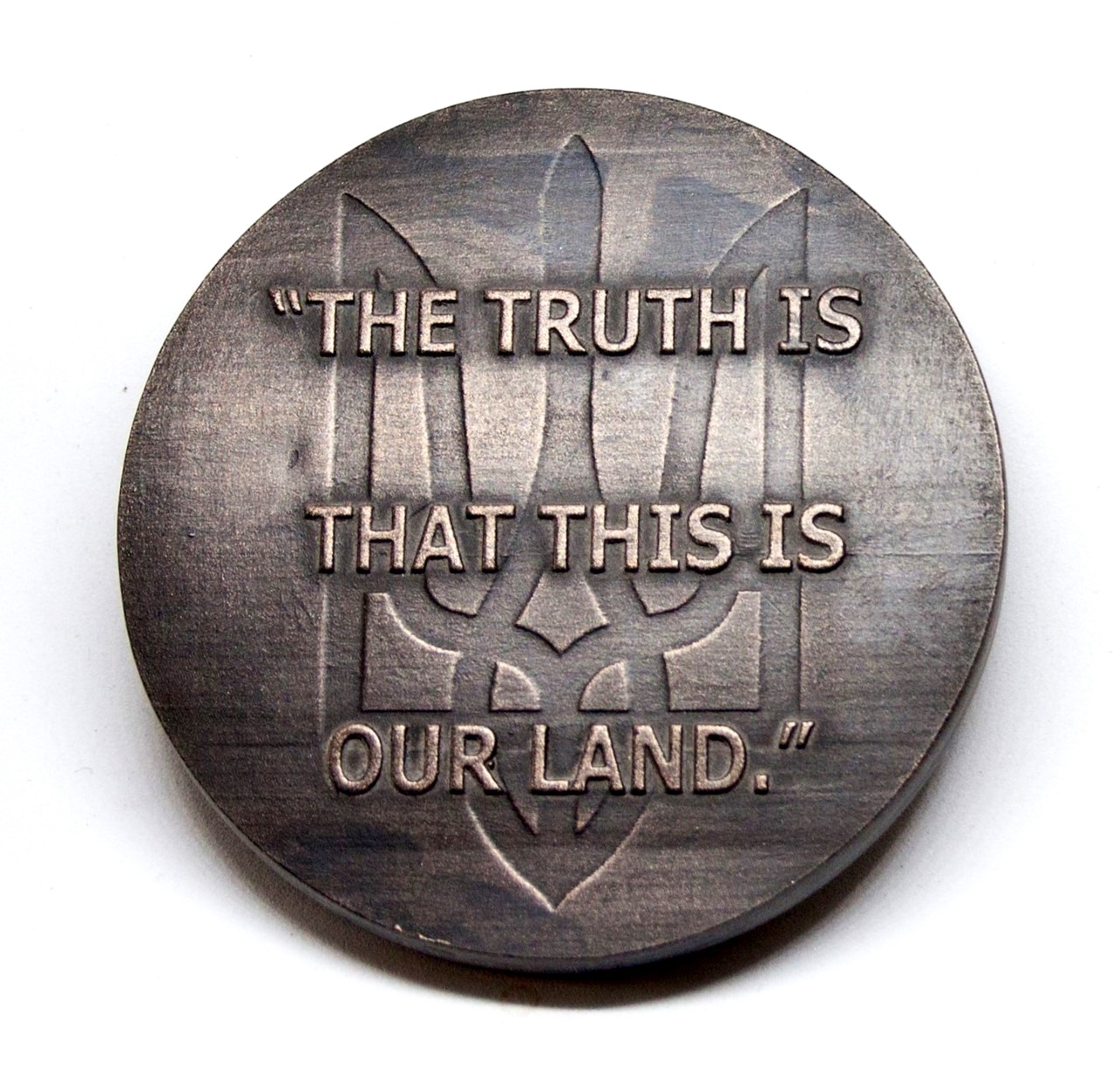 The reverse side of the medals features Zelensky’s inspirational words “THE TRUTH IS THAT THIS IS OUR LAND.” which is superimposed over the distinctive state seal of Ukraine.

This quote is an excerpt from an impromptu speech delivered to all Ukrainians two days after Russia’s invasion:

I am here. We are not putting down arms. We will be defending our country, because our weapon is truth, and our truth is that this is our land, our country, our children, and we will defend all of this. That is it. That’s all I wanted to tell you. Glory to Ukraine.

Jim Licaretz has created the original model in resin using a 3-D printer. He then made a mould and will cast the medals in bonded bronze, each of which he will hand-finish. No more than 199 of President Zelensky’s commemorative medals will be produced. Each will be accompanied by a certificate of authenticity and a stand so that it can be proudly displayed. The cost is U.S. $150 plus $15 per order in the United States or $25 elsewhere for shipping, with a limit of three medals per person. It is anticipated that if all medals are sold, a contribution of about $15,000 (or $75 per medal) will be made to help the Ukrainian victims of Russian aggression. To order, collectors may send payment via PayPal using the email address , which can also be used to inquire further about this very limited medal.