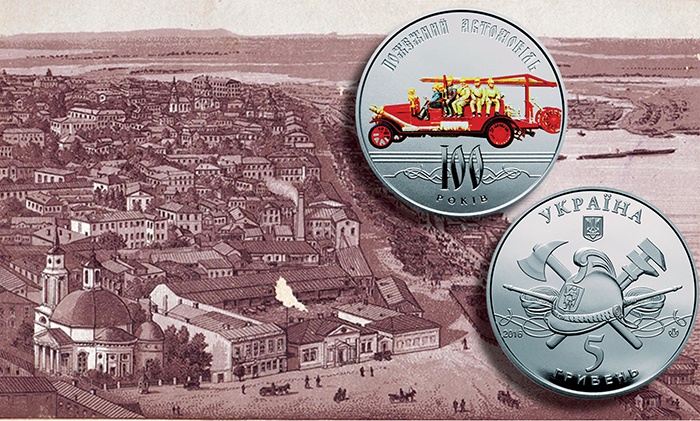 The city of Podil (discussed under “Kiev’s First Fire Engine,” below), restored after the Great Podil fire of 1811. The fire engine on the coin was the first of its kind in Kiev, and was introduced in the years following the massive fire. (Ca. 1900 engraving from the National Parliamentary Library of Ukraine)

This post was updated at 7:25 p.m. on October 14 to add a link to the National Museum of American History. This week is National Fire Prevention Week, and marks the museum’s annual highlight of its firefighting collection.

On October 4, the National Bank of Ukraine issued a new collector coin, highlighting the city of Kiev’s inauguration of their first motorized fire engine a century ago. (See “Kiev’s First Fire Engine,” below, for the history of that event and a photo of the actual fire engine.) 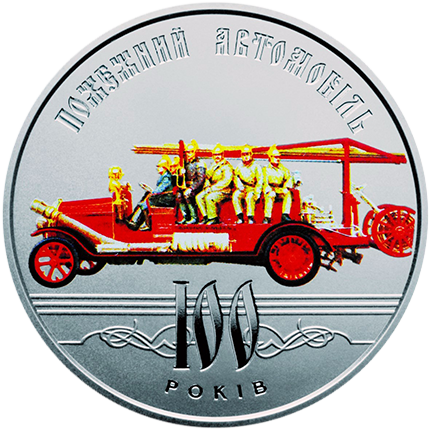 The coin is struck by the Mint of Ukraine and was designed by painter and sculptor Vladimir Demyanenko. The obverse includes a detailed color image of the first motorized fire truck along with the crew that made up the firefighters of the day. The design is based on an actual photograph, first published over 100 years ago, of the engine and its crew. Above the color depiction is the text ПОЖЕЖНИЙ АВТОМОБІЛЬ (Automobile Fire Truck) and 100 РОКІВ (100 Years). 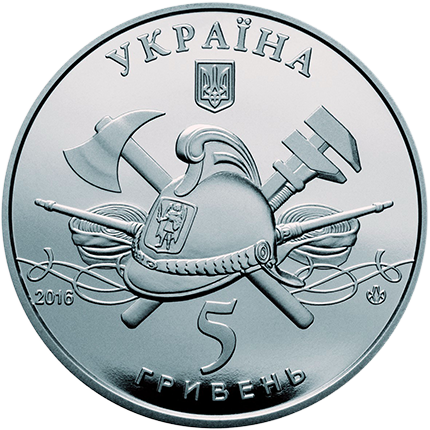 The reverse design includes a fire-fighter’s helmet of the era superimposed over a crossed axe (used to gain access to structures during a fire to rescue potential casualties) and wrench (used to turn on the water hydrants and valves on the fire truck). Also depicted are two-fire hose nozzles. Above the helmet is the national crest or insignia of Ukraine; below, the coin’s denomination of 5 Grivnia. The year of issue 2016 is placed just to the left of the primary design.

For additional information on this and other coins issued by the National Bank of Ukraine, please visit their website. In addition, a list of local sales and retail points can be found here. No information is currently available for international direct sales.

APMEX, meanwhile, carries Ukraine’s Archangel bullion coins and other beautiful items. Fans of collector coins might be interested in Canada’s tribute to the traditional Ukrainian pysanka, also available at APMEX.

The problem of how to effectively extinguish fires in heavily populated areas, such as built-up cities and towns, has been a problem for authorities for as long as most can remember. Since so many buildings at the turn of the 19th century were made of wood, the problem was particularly acute. Citizens and officials were abundantly aware that a small fire could easily spread and destroy half the city in a matter of hours if not extinguished in a very short period of time.

Kiev was no exception to this worry, and in its long history as a thriving metropolis suffered many severe fires—including one of the most famous, the Great Fire of Podil, in 1811. Podil, a historic neighborhood in Kiev, was one of the oldest districts and the birthplace of the city’s trade, commerce, and industry. In the early morning hours of July 9, 1811, a fire broke out on a quiet street in Podil and, as the winds were especially strong that morning, quickly escalated into a raging firestorm.

Out of the 3,672 households in the city limits of Kiev, 2,068 were located in Podil. It took three days to extinguish the fire, and more than 2,000 homes and magistrate or municipal buildings, 12 churches, and 3 monasteries were destroyed. It was later speculated by the Imperial authorities that the fire had been deliberately set by French spies to distract the Imperial government in a prelude to the French invasion of Russia. (Napoleon’s Grande Armée eventually crossed the Neman River in an attempt to engage and defeat the Russian army in 1812.)

The result of this fire significantly increased attention to the problem, such that, soon after, the first fire brigade was established. The initial techniques to combat fires were quite straightforward, consisting of a few carts able to hold water and a few harnessed horses to pull the carts. In subsequent years the equipment included improved carts to transport fire hoses, and barrels with a water pump to direct the water where it would have the best opportunity to put the fires out.

On June 24, 1913, during the sixth Congress of the Imperial Russian Fire Society, members demonstrated a motorized fire engine. It was the first time this type of apparatus had been seen in Kiev. The first fire engine to be put into service in the city was constructed using the chassis of a Mercedes and a modified body to enable the carrying of up to eight firefighters, as well as a water tank. 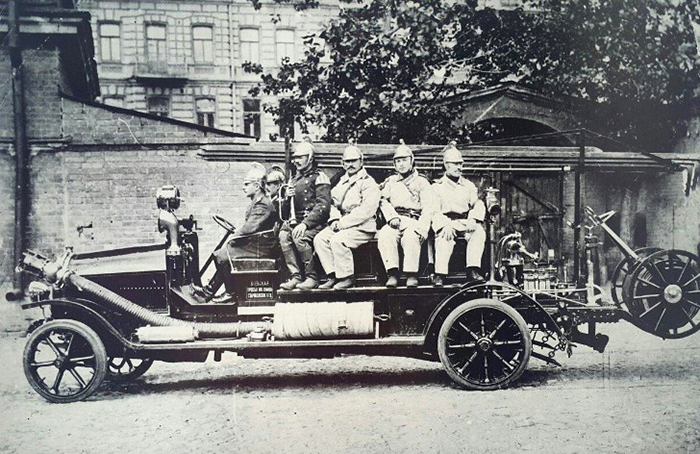 Unfortunately, the first fire engine was lost many years ago, but many images of this symbol of advanced fire-fighting survive, recording the men, their equipment, and the technology available to the city.
Did you know? It’s National Fire Prevention Week, and the Smithsonian’s National Museum of American History is highlighting its firefighting collection. While you’re there, check out their Betts, Harlan, and Hollingsworth engine, ca. 1842,