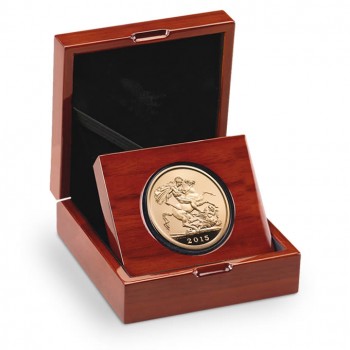 The Royal Mint has launched a classic and sought-after £5 gold coin that is five times the weight of the British sovereign. The largest coin within the sovereign range, the 2015 Five Sovereign Piece bears Benedetto Pistrucci’s classic St. George and the dragon reverse design, widely regarded as a numismatic masterpiece. Appearing for the first time on the obverse is Jody Clark’s fifth portrait of Queen Elizabeth II, introduced in March of this year.

The modern sovereign was first introduced in 1817 as part of the revised British coinage program following the Napoleonic wars, which saw the gold sovereign replace the guinea as the primary currency. First issued in 1820, the gold quintuple sovereign, or £5 piece, was considered by some to be a pattern coin and featured King George III on the obverse.

In both 1826 and 1839, Proof £5 gold pieces were issued as part of complete Proof coin sets; this also occurred in 1902, 1911, and 1937. In 1839, 1893, and 1902, however, there were ordinary circulation types issued in addition to their Proof counterparts. This popular denomination has been issued only in Proof and BU from 1980 onward, and is usually available in sets or as single pieces. The 2015 Five Sovereign Gold Piece is only available in single presentation form, and is not included in any set. It is struck to Brilliant Uncirculated standard and contains almost 40 grams of 22 carat gold.

For more information on this and other coins offered by the Royal Mint, please visit their Web site. Information is offered in English, with international orders dispatched where applicable.