The Royal Mint were pleasantly caught off guard as the latest Olympic coin to enter circulation was the focus for increased world-wide media attention over the holiday period. The latest Olympic coin dated 2011 for general release focuses on the subject of Football. Often referred to as the “beautiful game” it is thought to be the most widely supported and watched sport in the world.

The coin’s design was inspired by the “offside rule” which is actually explained on the reverse design of the coin itself. It is said that most fans find the offside rule simple to understand but somewhat difficult to explain, the coin does a very good job indeed of explaining the rule with its simple diagram and text. The coin is part of an overall set of 29 fifty pence coins which were produced to commemorate the upcoming summer Olympiad, to be held in London this summer from the 27th July to the 12th August 2012. 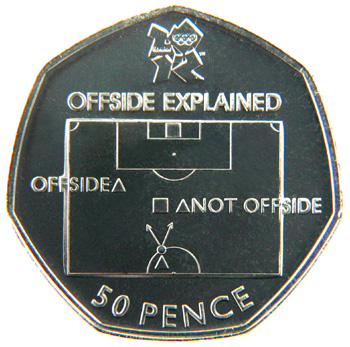 Submitted by production journalist Neil Wolfson as part of a campaign to encourage the public to design any one of the coins, the design is one of the more unusual ones to have been accepted by the Royal Mint and has since its release has been one of the more sought-after coins in the series. Neil chose to design the Football coin because of his love of the sport. 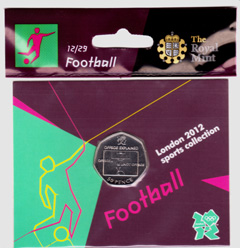 Commenting on his offside rule design Neil said: “The offside rule is always a talking point so I wanted to create something to original to reflect that. It’s a case of ‘lateral thinking’, so to speak!”

The base metal coin series is available from the Royal Mint in specially packaged presentation cards either individually or as part of the 29 coin set.

For more information on this and all of the coins offered for the Olympics, please visit the Royal mint’s website at: http://www.royalmint.com/olympicgames/SportsCollection/London-2012-50p-sports-collection.aspx?promcode=FW250