In 1994, the United States Mint issued commemorative coins to pay tribute three groups of American veterans. The silver dollars were available individually as well as packaged together as the U.S. Veterans Commemorative Silver Dollar Set. 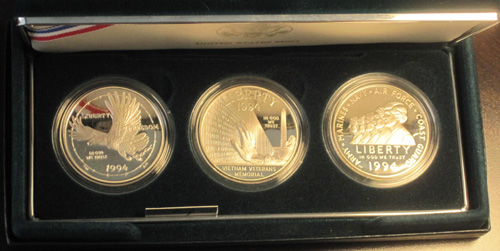 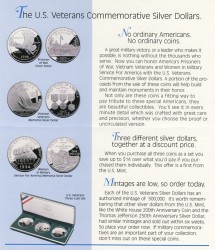 Within the promotional materials for the special sets, Philip N. Diehl Director of the United States Mint said, “Many coins, whether circulating or commmorative, pay tribute to the great military events and leaders that have shaped our nation. What is different about these coins is that they pay tribute to some of the people who are often overlooked — American Prisoners of War, Vietnam Veterans, and Women In Military Service for America.”

The trio of issues came at a time when the number of commemorative coins authorized by Congress and produced by the United States Mint had begun to swell. After issuing just a single commemorative coin in 1990, five coins issued in 1991, followed by seven coins in 1992, seven coins in 1993, and finally eight coins in 1994. The proliferation of issues had begun to result in lower sales for each program and would eventually lead to a limitation of two programs per year after the passage of the Commemorative Coin Reform Act of 1996. 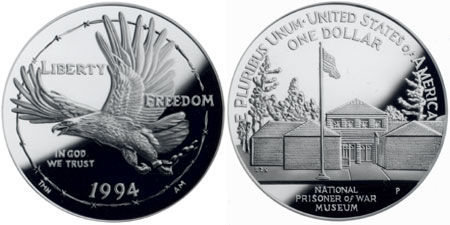 The Prisoner of War Silver Dollar featured a design by decorated Vietnam veteran Thomas M Nielson (obverse) and Edgar Z. Steever (reverse). On the obervere, a chained eagle breaks free through a ring to represent “Freedom”, while the reverse shows the proposed design for the National Prisoner of War Museum. The total sales reached 54,893 uncirculated and 224,449 proof coins out of the 500,000 maximum mintage. 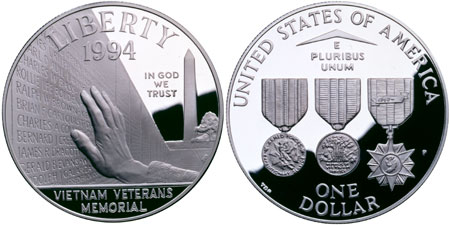 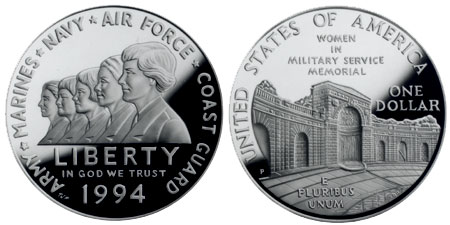 Lastly, the Women in Military Service Silver Dollar was designed by T. James Ferrell (obverse) and Thomas D. Rodgers Sr. (reverse). The obverse carries profile portraits of servicewomen representing the five branches of the United States military. The reverse depicts the approved design of the Women in Military Service for America Memorial. The final mintage reached 69,860 uncirculated and 241,278 proof coins out of the 500,000 maximum mintage.