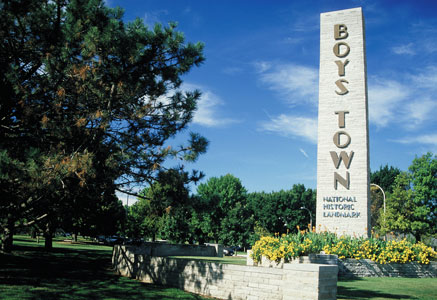 U.S. Mint Principal Deputy Director Rhett Jeppson also made an appearance, expressing his hope that “each time a person looks at any one of these unique designs it will spark an interest in learning about the history of Boys Town, acknowledging the extraordinary efforts made by this organization to give comfort and purpose to children in need, and recognizing the significant contributions of Father Flanagan.” 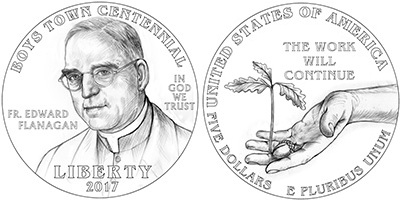 The $5 gold issue has been approved for issue up to 50,000 pieces. Its obverse was designed by Donna Weaver and sculpted by Don Everhart, and it features a portrait of Father Edward Flanagan, the Irish-born priest who founded Boys Town. Inscribed on this side of the coin are BOYS TOWN CENTENNIAL, FR. EDWARD FLANAGAN, IN GOD WE TRUST, LIBERTY, and 2017.

The reverse, designed by Donna Weaver and sculpted by Jim Licaretz, features an image of a hand holding an acorn, which is growing into a young tree. Inscriptions on this side of the coin include UNITED STATES OF AMERICA, E PLURIBUS UNUM, FIVE DOLLARS, and THE WORK WILL CONTINUE. 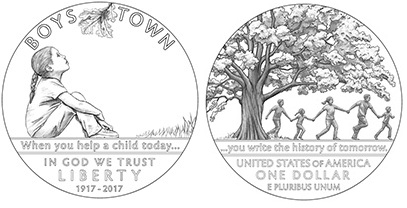 The silver dollar has been approved for a mintage of up to 350,000 pieces. Its obverse was designed by Emily Damstra and sculpted by Joseph Menna, and it features a depiction of an isolated young girl with the inscriptions BOYS TOWN, WHEN YOU HELP A CHILD TODAY…, IN GOD WE TRUST, LIBERTY, and the centennial dates 1917-2017.

The reverse, also designed by Damstra and sculpted by Menna, shows the same girl in community with others beneath a flourishing oak tree. Inscribed on the reverse are UNITED STATES OF AMERICA, ONE DOLLAR, E PLURIBUS UNUM, and …YOU WRITE THE HISTORY OF TOMORROW, which concludes the sentence introduced on the obverse. 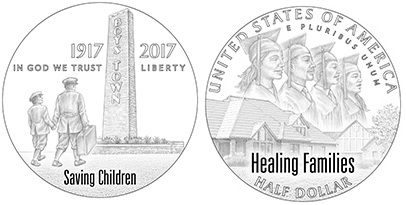 The clad half dollar has been approved for a mintage up to 300,000 coins. Its obverse was designed by Chris Costello and sculpted by Renata Gordon. It features of an image of a boy holding the hand of his younger brother as they approach the boys’ home. Inscribed on this side of the coin is IN GOD WE TRUST, LIBERTY, SAVING CHILDREN, and the centennial dates, 1917 and 2017.

The reverse, designed by Costello and sculpted by Phebe Hemphill, carries a depiction of a “Boys Town neighborhood of homes where children are schooled and nurtured by caring families,” according to a press release. Inscribed on the reverse are UNITED STATES OF AMERICA, E PLURIBUS UNUM, HALF DOLLAR, and HEALING FAMILIES.