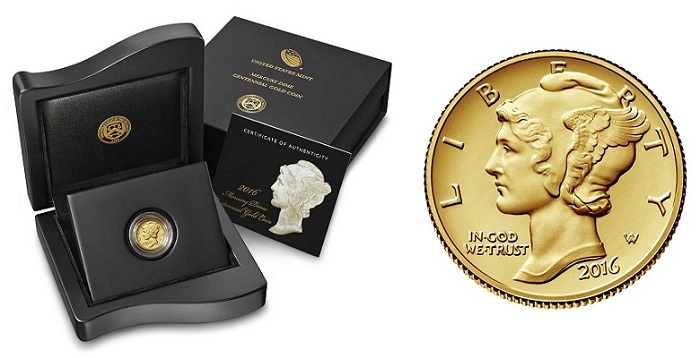 With just two weeks to go before the release of the 2016 Mercury Dime Centennial Gold Coin, the U.S. Mint has shared new images of the issue, along with its mintage limit and household order limit. While we won’t know the cost of the item until closer to its April 21 launch-date, we now know that its mintage will be limited to 125,000 pieces and that orders will be limited to 10 per household.

The coin will feature a “business strike” finish, approximating the look and feel of the original 1916 circulating dime, and will measure .650 inches in diameter and .047 inches thick. 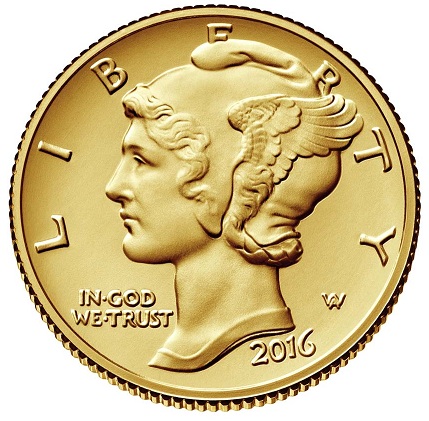 The Winged Liberty dime was designed by Adolph A. Weinmen. It’s obverse features an image of Liberty facing left and wearing a winged cap; Liberty’s resemblance in this design to the Roman god, Mercury, led to the issue being nicknamed the “Mercury dime.” Inscribed along the rim are LIBERTY, IN GOD WE TRUST, the artist’s initials, and 2016.

The coin’s reverse bears an illustration of a Roman fasces with an olive branch, along with the inscriptions UNITED STATES OF AMERICA, E PLURIBUS UNUM, ONE DIME, the West Point Mint’s “W” mint mark, AU 24K, and the item’s weight, 1/10 OZ. 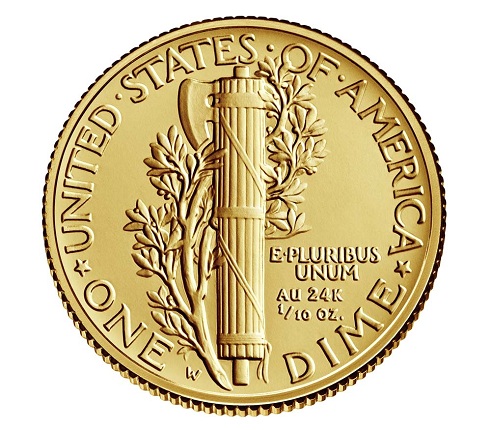 The gold Mercury dime will be the first of three reissues celebrating the centenary of the first appearance of three classic circulation coins. The 1916 dime, quarter, and half dollar — originally 90% silver and bearing designs known as “Winged Liberty,” “Standing Liberty,” and “Walking Liberty,” respectively — will all be issued in .9999 24-karat gold this year.

The reissues will vary in size, roughly in accordance with the dimensions of the original pieces. As noted above, the Mercury dime will come as a 1/10 oz. piece, while the Standing Liberty quarter will be 1/4 oz. and the Walking Liberty half dollar will be the largest at 1/2 oz. Release dates for the latter two issues have yet to be determined.

For more information on the 2016 Mercury Dime Centennial Gold Coin, please visit the Web site of the U.S. Mint.