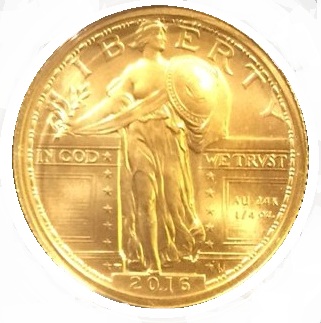 The U.S. Mint has shared new information on its upcoming 2016 Standing Liberty Centennial Gold Coin, due for release on Thursday, September 8, at noon ET. The issue has been given a mintage limit of 100,000 coins, with an order limit of one coin per household.

In contrast, the 2016 Mercury Dime Centennial Gold Coin, launched on April 21, had a mintage limited to 125,000 coins and an order limit of 10 per household. The gold Mercury dime coin went on to sell all of its available inventory within 45 minutes of its release. Although the gold Standing Liberty quarter was expected to have a smaller mintage limit due to its larger size and therefore higher cost, the one-coin order limit seems to be an indication that the Mint is looking to slow sales of this issue and avoid a one-hour sellout. This could have the effect of allowing a wider array of collectors the chance to purchase the item.

The coin will come housed in a custom wooden presentation case, accompanied by a certificate of authenticity. Pricing will be announced at a later time, but the quarter would be $485 if released today, according to the Mint’s pricing chart for this year’s centennial gold coins.

The Standing Liberty Quarter Centennial Gold Coin will be composed of 1/4-ounce of 99.99% gold, measuring 22 mm in diameter and 1.63 mm thick. It will feature a Business Strike finish, a reeded edge, and the West Point Mint’s “W” mint mark. More information will be posted as it becomes available.