On August 25 U.S. Mint spokesman Michael White notified the numismatic press community that the four gold commemorative coins which were suspended on August 12 were being relisted for sale.

The coins are already relisted on the Mint’s web site (http://catalog.usmint.gov) at new fixed prices. The new prices are as follows: 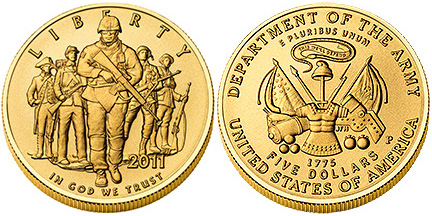 Sales of the coins had been suspended [http://mintnewsblog.com/2011/08/commemorative-gold-coin-sales-suspended/] because rapidly rising gold prices were causing the melt value of the coins to reach almost the same amount as the retail price of the coins. The affected coins were the uncirculated and proof versions of the 2011 U.S. Army and Medal of Honor gold commemoratives, which contain almost a quarter ounce of gold (.24187 troy ounces).

Unlike other numismatic gold products offered by the Mint, whose prices fluctuate weekly based on a complex pricing grid, the gold commemoratives are sold at fixed price levels.

When the coins were suspended, the Mint indicated it planned to reprice these coins using a similar structure to the grid for other gold coins. But for reasons which were not explained, the coins were instead repriced at fixed levels, without any built in mechanism for adjustments based on the market price of gold.

Update: The pricing for the commemorative gold coins will be based on a grid, published by the United States Mint on August 26. As with other numismatic gold products, weekly pricing adjustments are allowed based on the average market price of gold. The prices currently in effect reflect the $1,750 to $1,799.99 pricing tier.

On August 24 gold suffered its largest decrease since the height of the 2008 financial crisis, dropping almost $200 from its August 22 nominal high of $1,917. In the aftermath of the price correction, a 27% increase in margin requirements for futures traders was announced by the Chicago Mercantile Exchange. This followed a 22% CME increase made earlier this month and one earlier this week on the Shanghai exchange.

But declining stock prices on August 25, especially in Germany, and continued uncertainty about the U.S. and European economies, as well as buyers who snapped up gold at the lower levels, resulted in a significant rebound in gold prices back towards the $1800 level despite the margin increases. Mainstream financial analysts quickly proclaimed the end of the rally in gold prices, but subsequent events have called that view into question. The rebound in prices following several margin increases is a significantly bullish sign. Last week gold closed at approximately $1850.

Collectors seem to feel both of 2011 gold commemorative coins are attractive and commemorate something of significance, but many believe the Army obverse is a rather busy design for a quarter-ounce coin. The Army obverse uses a modernized image of U.S. soldiers from different eras of U.S. history.

On the other hand, the Medal of Honor coin is often described as having one of the more compelling recent designs. The obverse depicts a Medal of Honor, while the reverse depicts Minerva. As the Mint’s web site explains, Minerva is standing with a shield that represents the Army and Navy in her right hand, and the Union flag in her left hand. She is flanked by a Civil War-era artillery cannon and wheel.

Although the coins have a maximum authorized mintage of 100,000 each, the large number of numismatic offerings from the Mint this year appears to have reduced sales of these coins.

The Army coins were first made available for sale on January 31, while the Medal of Honor coins debuted on February 25.

Based on the latest U.S. Mint sales report, these coins have sold the following number of coins as of August 22: 16,136 proof Army coins, 7,009 uncirculated Army coins, 16,471 Medal of Honor proof coins, and 7,274 Medal of Honor uncirculated coins. Until the rapid increase in gold prices of the past couple weeks, both coins had sold what was an unusually small number of pieces for a $5 gold commemorative, especially considering that these are the first gold commemoratives issued since the bald eagle coins in 2008.

The bald eagle coin was released both as a single proof and uncirculated coin, and the proof version was included in a three-piece set with the silver dollar and clad half dollar. Despite a very quick sell-out of this set, and an iconic and highly popular symbol (the bald eagle), these sets have underperformed on the secondary market. The same is true of the single coins despite relatively low mintages.