Yesterday, April 13, the Congressional Gold Medal was awarded to members of the U.S. Army’s 65th Infantry Regiment — a Puerto Rican unit widely known as the Borinqueneers — for their service during World Wars I & II, and the Korean War. The ceremony was held in Emancipation Hall at the U.S. Capitol and was attended by Congressional leaders, including Representatives Paul Ryan and Nancy Pelosi, and Senators Harry Reid and Mitch McConnell.

Now the U.S. Mint is taking orders for bronze versions of the medal. Collectors can purchase 3-inch and 1.5-inch Congressional Gold medal replicas, which are available for $39.95 and $6.95, respectively. 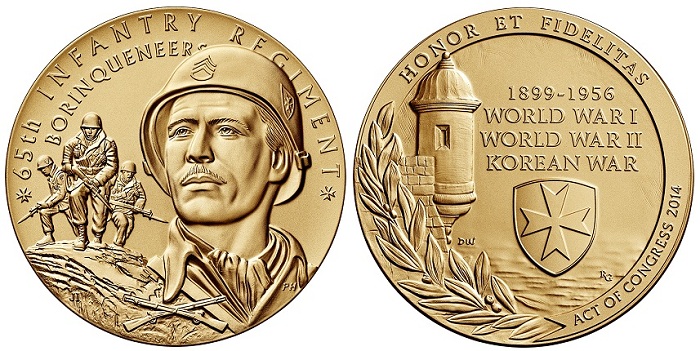 The obverse design, created by Joel Iskowitz and engraved by Phebe Hemphill, features a close up of a staff sergeant with the inscriptions 65th INFANTRY REGIMENT and BORINQUENEERS. According to the Mint, the three soldiers in the background appear in “inverted ‘V’ formation, taking the high ground with fixed bayonets during an assault on the People’s Liberation Army of China during the Korean War.” 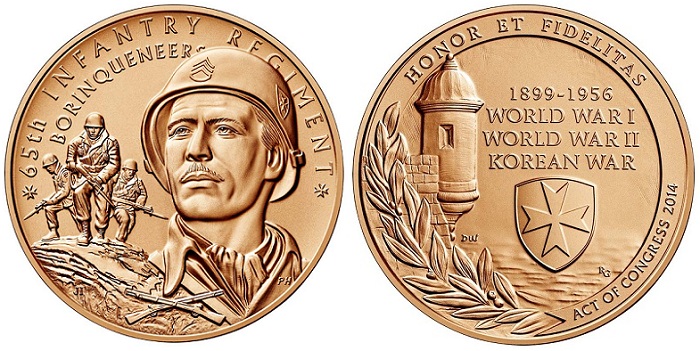 The reverse was designed by Donna Weaver and engraved by Renata Gordon. It features an image of the Castillo de San Felipe del Morro of San Juan, Puerto Rico, with an olive branch placed near the rim, and the 65th Infantry insignia situated near the center. Inscribed on this side of the medal are the unit’s motto, HONOR ET FIDELITAS (“Honor and Fidelity”), 1899-1956, WORLD WAR I, WORLD WAR II, KOREAN WAR, and ACT OF CONGRESS 2014.

A Web site dedicated to promoting the legacy of the Borinqueneers notes that during the Korean War alone the regiment “earned nine Distinguished Service Crosses, approximately 250 Silver Stars, over 600 Bronze Stars, and more than 2,700 Purple Hearts.” The Congressional Gold Medal is the highest civilian honor awarded by the United States, along with the Presidential Medal of Freedom.

The ceremony can be viewed here.