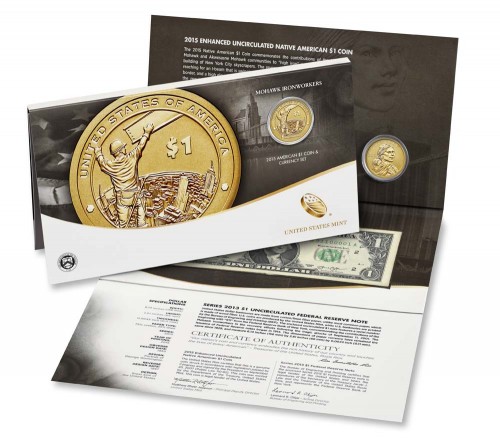 The set will include a tri-fold presentation folder, an enhanced Uncirculated 2015 Native American $1 Coin that is only available as part of this set, and a $1 Series 2013 note from the Federal Reserve Bank of New York. Orders are restricted to five per household, and the overall mintage limit is set at 90,000 units. Each set will cost $14.95.

The 2015 Native American $1 Coin features a reverse image of a Mohawk ironworker guiding an I-beam into place high above a sprawling Manhattan cityscape. A rivet is placed outside of the border on each side of the image, with UNITED STATES OF AMERICA curving across the top of the coin and MOHAWK IRONWORKERS inscribed at the bottom. Designed by Ronald D. Sanders and sculpted by Phebe Hemphill, the image celebrates the contributions of Mohawk ironworkers to the construction of New York City skyscrapers like the World Trade Center. This “enhanced Uncirculated” coin has undergone a variety of finishing techniques to lend a unique luster and texture to the coin’s surface.

The coin’s obverse bears the Glenda Goodacre portrait of Sacagawea common to Native American dollars since 2000. The words IN GOD WE TRUST are situated to the left of the image with LIBERTY positioned at the top.

The one dollar notes included in the set carry a serial number beginning with “911” in acknowledgement of the Mohawk Ironworkers’ recovery work after the collapse of the twin towers in 2001. A certificate of authenticity is printed on the package.

Last year, the mint was slow to publicize the inclusion of an enhanced Uncirculated coin in the 2014 Coin & Currency set. This meant the set was greeted by modest interest upon its release until collectors got wind of the unique finish on the Sacagawea dollar. As news of the enhanced Uncirculated coin spread, sales spiked and the set sold out quickly. It will be interesting to see how long it takes the 2015 set to exhaust its higher mintage of 90,000.

Also debuting this week will be the Lady Bird Johnson First Spouse Gold Coins, available at noon on Thursday, August 27th. The design will come in both Proof and Uncirculated versions. All First Spouse gold coins are currently priced at $765 each for Proof pieces and $745 for Uncirculated pieces, though their costs are subject to change in keeping with the mint’s pricing structure for gold products. The total mintage for both versions of the Lady Bird Johnson First Spouse Gold Coins will be limited to 10,000.