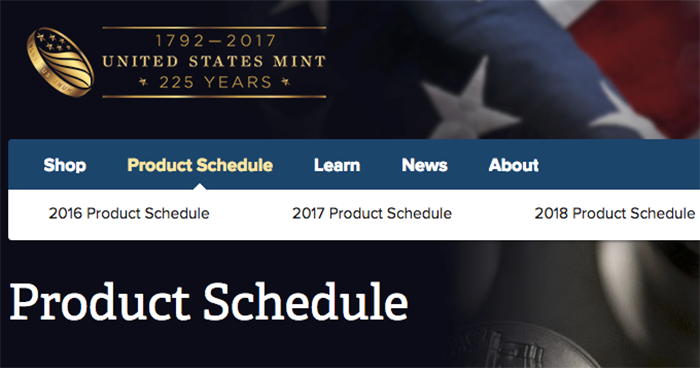 The Mint has begun filling in its calendar-year 2018 sales schedule—and in a move that will be welcomed by collectors, the Mint has abandoned this year’s one-month-at-a-time announcement style. In years past, the Mint announced the first few months’ release dates in detail, then provided a general quarterly schedule for the rest of the year. Collectors could view the entire product offering and plan their budgets accordingly. For most of 2017, however, the Mint announced release dates no more than one month in advance. Possibly this was an attempt to manage surprise releases linked to the Mint’s 225th-anniversary celebrations; in any case, the plan has met with almost universal consternation since the January 2017 releases were first published.

For 2018 the Mint has laid out a specific schedule of release dates for the first (winter) quarter, January through March. The products to be released in each of the remaining quarters are also listed, in the general order in which their releases are planned.

January 2018 opens with the American Eagle 1-ounce silver Proof coin, both as an individual item and in a “bulk pack” (product code 18EA042). A similar product listing has appeared in the Mint’s numismatic sales reports in 2017, but the item was never listed on the calendar. (Coin Update has contacted the Mint’s Office of Corporate Communications with a request for details about these bulk packs and will update this post accordingly.)

The rest of the numismatic versions of the annual bullion series are distributed fairly evenly across the year. March 1 will see the release of the American Eagle gold Proofs: the four-coin set, the 1-ounce coin, and the 1/2-, 1/4-, and 1/10-ounce coins. The American Buffalo gold Proof and American Eagle silver Uncirculated 1-ounce coins will make their appearance in the spring. Summer will bring the American Eagle 1-ounce gold Uncirculated and silver Proof coins, and the fall season will see the release of the 1-ounce palladium Proof coin (the follow-up to this year’s palladium bullion coin).

A new series of platinum Proof coins, “Preamble to the Declaration of Independence,” will be initiated on January 25; the design will honor “Life” in “Life, Liberty, and the pursuit of Happiness.”

Coins from the first of the year’s two commemorative programs, which will mark the centennial of World War I, will be released on January 17. The product offerings comprise Proof and Uncirculated silver dollars, along with silver-dollar-and-medal sets recognizing the era’s American military branches: Air Service, Army, Coast Guard, Marine Corps, and Navy. ⤵️

Collectors may get their kicks with Route 66 coins

PCGS to begin branch-mint ID for certain American Silver Eagles; gives tips on how to identify the branch