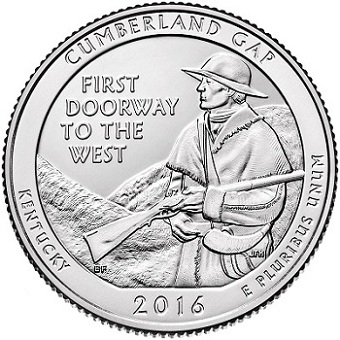 The U.S. Mint launched the new Cumberland Gap National Historical Park quarter today at an 11 a.m. ceremony in Middlesboro, Kentucky. The Mint estimates that 3,600 people attended the event, 2,700 of which were school children.

Marc Landry, plant manager at the U.S. Mint’s Philadelphia facility, said of the park, “Modern day explorers and travelers stand in awe at this great break in the Appalachian Mountain chain, which gave passage to thousands seeking something new beyond the horizon.” He noted that with the release of the coins “millions of Americans will now have a reminder of the important role this mountain pass has played in the settlement of our nation.”

Of the 2,700 kids present, 2,200 were jointly sworn in as junior rangers. The Mint and Home Federal Bank also hosted a coin exchange program that saw members of the public trade $26,000 in cash for rolls of the new quarters.

The Mint also hosted a Coin Forum yesterday afternoon at 3 p.m. ET at the C.V. Whitney Convention Center in Pineville, Kentucky. The forum gave the 40 collectors in attendance a chance to learn more about the Mint’s upcoming initiatives and weigh in on their ideas for future coinage.

Cumberland Gap National Historical Park was established on June 11, 1940 and includes land extending into Kentucky, Virginia, and Tennessee. The Cumberland Gap Quarter is the 32nd release in the Mint’s ATB series, which will conclude in 2021 following the issue of its 56th design. All five of this year’s quarter designs can be viewed here.

Hal Rogers is about to address the crowd of thousands here at Cumberland Gap NHP. pic.twitter.com/apCAIHFr1A