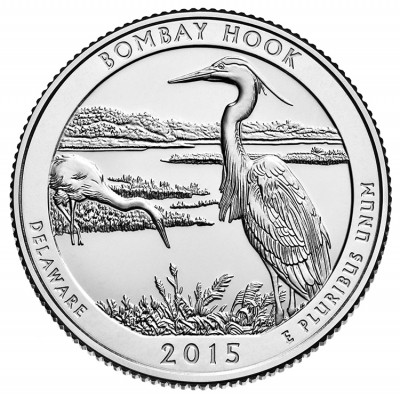 From a U.S. Mint press release:

“I’m uniquely excited about this launch because we are making these Bombay Hook quarters 67 miles north of here at our plant in Philadelphia,” said United States Mint at Philadelphia Plant Manager Marc Landry. “Some of the very people in our plant are Delaware residents, so this quarter carries a special meaning to the men and women of the United States Mint.”

Located along the coast of Delaware Bay, the Bombay Hook National Wildlife Refuge is a nationally recognized birding spot attracting bird watchers from across the country and is designated a Globally Important Bird Area. The quarter honoring the site is the 29th release in the United States Mint America the Beautiful Quarters® Program, a 12-year initiative to honor 56 national sites authorized by Public Law 110-456. Each year, the public will see five new national sites depicted on the reverse of the America the Beautiful Quarters coins. The United States Mint is issuing these quarters in the order in which the national sites were officially established. The final coin in the Program will be released in 2021.