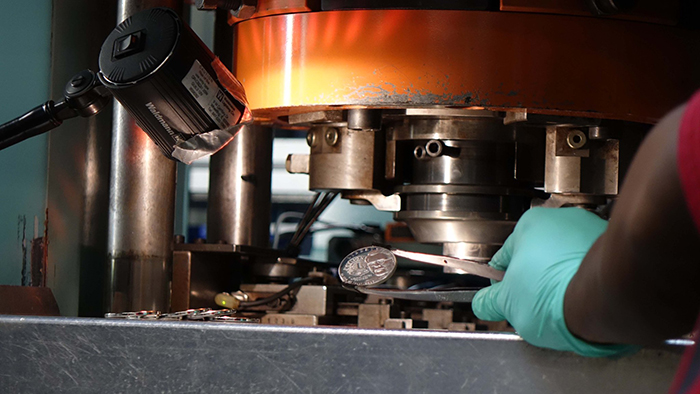 “The United States Mint is proud to honor one of the most well-known and highly regarded service organizations,” said Mint Principal Deputy Director Jeppson. “Service is a core value of the Mint, and the Lions Clubs is one of the best examples of service not only here in the United States, but across the world.”

Jeppson was joined by James Franklin Moore III, chairperson of the Lions Clubs International Centennial Committee. Moore, who struck the first Proof silver dollar during the ceremony, remarked, “Lions Clubs International is honored to be among a relatively few organizations to be included in the United States Mint Commemorative Coin program. This is a wonderful way to mark our 100 years of global humanitarian service.”

Public Law 112-181 authorizes the Mint to strike and issue up to 400,000 silver dollar coins with designs emblematic of the Lions Clubs International centennial.


The reverse depicts a male and female lion with a lion cub superimposed over a globe. Inscriptions are UNITED STATES OF AMERICA, $1, E PLURIBUS UNUM, and CELEBRATING 100 YEARS OF SERVICE. The reverse was designed by AIP designer Patricia Lucas-Morris and sculpted by Mint sculptor-engraver Don Everhart.

The price of each Lions Clubs International Centennial silver dollar will include a $10 surcharge that is authorized to be paid to the Lions Clubs International Foundation to further its programs for the blind and visually impaired in the United States and abroad; to invest in adaptive technologies for the disabled; and to invest in youth and those affected by a major disaster.

The Mint will announce the coin’s release date and additional pricing information in 2017.

On June 7, 2017, Lions Clubs International will celebrate 100 years of community service to men, women, and children worldwide. Since its founding, it has become one of the world’s largest organizations of its kind. Its 1.4 million members in more than 47,000 clubs provide humanitarian services in more than 200 countries.

The Mint is the nation’s sole manufacturer of legal-tender coinage and is responsible for producing circulating coins for the nation to conduct its trade and commerce. The Mint also produces numismatic products, including Proof, uncirculated, and commemorative coins; Congressional Gold Medals; and silver, gold, and platinum bullion coins. The Mint’s numismatic programs are self-sustaining and operate at no cost to taxpayers.  ❑
Share: