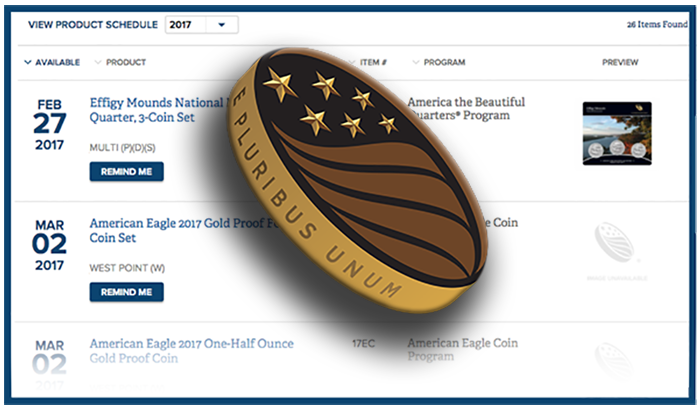 The Mint has updated its online catalog to include March issues and their dates. It has also released the pricing for the 2017 Boys Town Centennial commemorative silver coins; these prices are not yet listed on the website but will be published in the next Federal Register.

March 2 is the big day for American Eagle 2017 gold Proof coins. Pricing for the four coins (which is based on the Mint’s pricing grid and the London Bullion Market Association’s value for gold bullion) has not yet been set. The coins, and their product numbers, are:

On March 7, the Mint releases 2017’s first 5-ounce America the Beautiful Uncirculated silver coin, honoring Effigy Mounds National Monument (17AJ). This is the 36th design in the ATB quarters program. As with the American Eagle gold Proof coins, pricing will be established closer to the release date.

The seven Boys Town Centennial commemorative products will be released on March 9. As always, the coins will be available at an introductory price for a limited time before the regular price applies. The values for silver and clad coins are listed here; the gold coins will be priced closer to the release date. (The three-coin set, which contains one gold Proof, will be priced at that time as well.)

The last two products to be released in March are the American Eagle 2017 one-ounce silver Proof coin (17EA), which will be released March 23; and the Mint’s annual Proof Set (17RG), released March 29. Last year, the Proof Set was priced at $31.95. This year, the set will be priced at $26.95, since it will contain three fewer dollar coins (the Presidential $1 coin program having concluded last year).   ❑