When Tom Uram, President of the Pennsylvania Association of Numismatists, conceived of a medal to honor Pope Francis’s first visit to the United States, he hoped to commission the best sculptor he could find to bring the image to life. With the support of the Roman Catholic Diocese of Washington, he did just that: Don Everhart, sculptor-engraver at the U.S. Mint since 2004, agreed to help make the medal a reality.

A PAN press release notes that there was not much time between confirmation of the pope’s visit and his impending arrival, so the process of working to “reach a design agreement and allow enough time for Don Everhart to sculpt it and get it into production became a formidable challenge.” 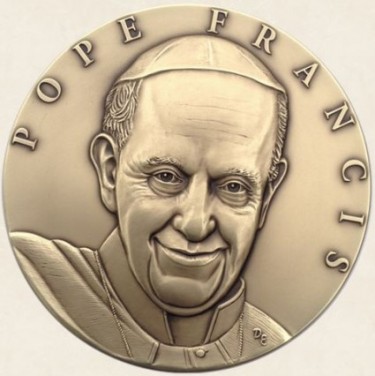 Now, with the pope due to arrive in Washington on Tuesday, the medals are available for purchase. The design comes in bronze or silver in two sizes: 1 3/4 inches and 3 inches.

The silver medals weigh 2 ounces and 10 ounces, respectively, and are made of silver that is .999% pure, with 24-karat gold embellishment. The small silver medal costs $149.95, while the larger issue is priced at $449.95. The small and large bronze issues are available for $29.95 and $99.95, respectively. The medals were minted at the Northwest Territorial Mint and are stamped MADE IN THE U.S.A.

The obverse of the the medals feature a portrait of the pope with POPE FRANCIS inscribed along the top of the design. The reverse image includes depictions of recognizable domes from three buildings in the Washington, D.C. area: the Basilica of the National Shrine of the Immaculate Conception, the Cathedral of St. Matthew the Apostle, and the U.S. Capitol building. Inscribed around the image are WASHINGTON, D.C., PAPAL VISIT, and SEPTEMBER 2015. 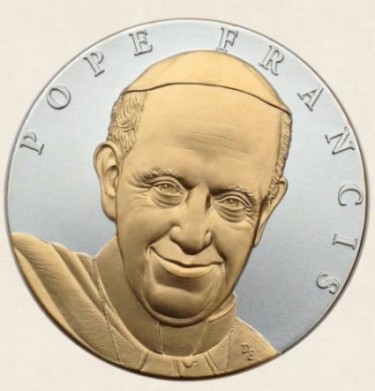 Proceeds from sales of the medals will go to benefit the National Shrine of the Immaculate Conception in Washington, D.C., and the Pennsylvania Association of Numismatists. In addition to serving as PAN President, Tom Uram has been a member of the Citizens Coinage Advisory Committee since 2012 and has written articles for the American Numismatic Association since 1974.

The pope’s arrival this week will mark his first-ever visit to the United States. Other firsts will take place as well: Francis will be the first pope to address a joint session of Congress and the first to canonize a saint on American soil.

For more information on the Pope Francis medals or the Pennsylvania Association of Numismatists, visit the PAN Web site.