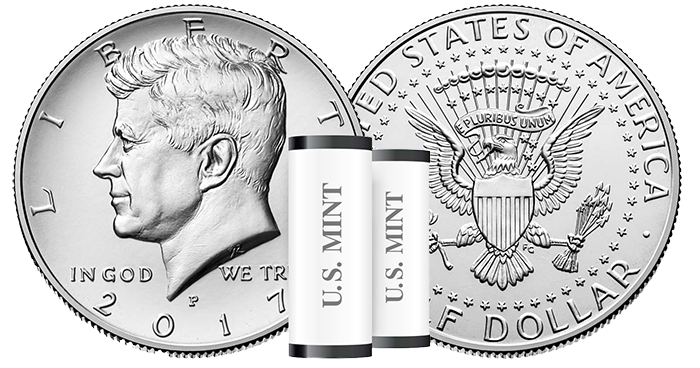 Available product options and their prices are as follows:

The obverse of the Kennedy half dollar features the original 1964 design of President John Fitzgerald Kennedy and the inscriptions “LIBERTY,” “IN GOD WE TRUST,” and “2017.” The reverse design is based on the Presidential seal and consists of a heraldic eagle with a shield on its breast holding a symbolic olive branch and a bundle of 13 arrows. A ring of 50 stars surrounds the design with the inscriptions “UNITED STATES OF AMERICA,” “E PLURIBUS UNUM,” and “HALF DOLLAR.”

Orders will be accepted at the Mint’s online catalog at https://catalog.usmint.gov/ and at 1-800-USA-MINT (872-6468). Hearing- and speech-impaired customers with TTY equipment may order by calling 1-888-321-MINT (6468). Information about shipping options is available at https://www.catalog.usmint.gov/customer-service/shipping.html.

Bags and rolls of Kennedy half dollars can also be purchased through the Mint’s Product Enrollment Program. For additional information about this convenient ordering method, please review the FAQs at https://catalog.usmint.gov/customer-service/faqs/.

About the United States Mint
The United States Mint was created by Congress in 1792 and became part of the Department of the Treasury in 1873. It is the Nation’s sole manufacturer of legal tender coinage and is responsible for producing circulating coinage for the Nation to conduct its trade and commerce. The Mint also produces numismatic products, including proof, uncirculated, and commemorative coins; Congressional Gold Medals; and silver, gold, and platinum bullion coins. Its numismatic programs are self-sustaining and operate at no cost to taxpayers. The Mint is celebrating its 225th anniversary in 2017 (#USMint225).   ❑