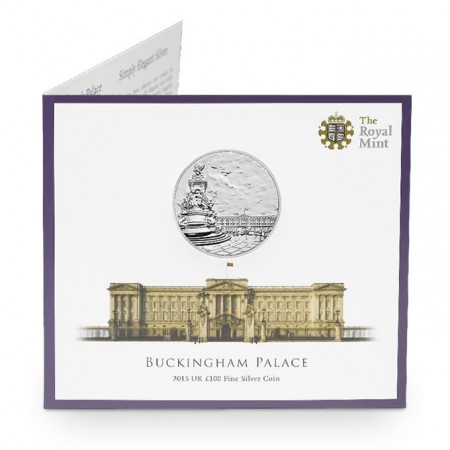 The Royal Mint has announced the launch of its second “£100 for £100” face value silver coin, which features an image of Buckingham Palace, official residence of the British monarch.

Purchased in 1761 just a year after his accession, the expansive building then known as Buckingham House was named after its owner, the Duke of Buckingham. The residence, described as a large townhouse, was built in 1703 and is located just yards from St. James Palace, the official home of the kings of England at the time. The house was originally meant to be used as a private home for the King’s new bride, Princess Charlotte of Mecklenburg-Strelitz, who would become Queen Charlotte. The structure was then known as “Queen’s House,” and was occasionally used for entertainment by Queen Charlotte and her court.

King George IV, son of George III, had ambitious plans to transform the building into a truly magnificent palace. He hired famed architect John Nash (1752 – 1835), known as the designer of the famed Royal Pavilion in Brighton. Nash added three wings to the existing structure, but the ever-increasing costs of the project caused the remaining plans to be shelved, and King George never lived in the palace during his ten-year reign.

It was not until 1837, during the reign of Queen Victoria, that Buckingham Palace became the official residence of the British royal family. The palace underwent significant renovation and expansion just before and during Victoria’s early years as queen, and it was then that the East Front was added, along with the balcony on which the royal family often makes appearances to this day. During the reign of King Edward VII, many rooms of the palace were either restored or renovated to suit the styles and tastes of the king and his Queen Consort, Alexandra.

Today, the palace contains over 830,000 square feet of floor space. The palace’s ballroom, added by Queen Victoria, is the largest room in the building and today serves as the dining room for official state occasions and investiture ceremonies. With 40 acres adjacent, including a helicopter pad, a lake, and a tennis court, the garden of Buckingham Palace is the largest private garden in London.

Buckingham Palace is the official home of Queen Elizabeth II and Prince Philip, Duke of Edinburgh, while serving as the London residence of Prince Andrew, Duke of York, Prince Edward, Earl  of Wessex, and Edward’s wife, Sophie, the Countess of Wessex. More importantly, the palace is a working environment housing the offices of these working members of the royal family with a staff of 800 people.

Buckingham Palace is a focal point for national celebrations like the 70th anniversary of the end of World War II and for royal occasions such as the Royal wedding of Prince William in 2011. On the queen’s birthday, crowds gather in front of the gates to cheer in support of the Queen and members of the royal family. Recently, it has been announced that the Palace is in need of extensive renovation, which may exceed costs of 150 million pounds and may compel the Queen and her family to vacate the building until its completion.

The coin, designed by Royal Mint artists Laura Clancy and Glyn Davies, includes a depiction of Buckingham Palace from a tourist’s eye view, across The Mall and past the ornate Victoria Memorial centered in front of the Palace. The obverse bears the fifth definitive portrait of Queen Elizabeth II as designed by Royal Mint engraver Jody Clark, which has been in use since March of this year.

This is the second silver coin with a denomination of £100 available for its face value. The first, issued last December, featured an image of the Palace of Westminster and sold out in a matter of weeks. The Royal Mint also offers a similar silver coin program of “£20 for £20.” For more information on this and other coins offered by the Royal Mint, please visit their Web site. Information is offered in English, with international orders dispatched where applicable.