The Treasury of the British Virgin Islands have launched (9th March) two new coins to mark both the thirtieth birthdays of Britain’s royal couple, their Royal Highness’s the Duke and Duchess of Cambridge, who also celebrate their first wedding anniversary.

As Prince William completes his tour of duty in the Royal Marines presently serving in the Falkland Islands, the Duchess of Cambridge is accompanying Her Majesty the Queen during her Jubilee tour of the United Kingdom. These young and most senior members of the Royal family are carving out specific duties and responsibilities as well as providing support for Queen Elizabeth II as she celebrates her 60th year of reign, only the second British Monarch to do so. 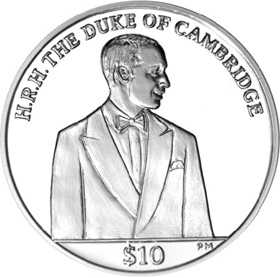 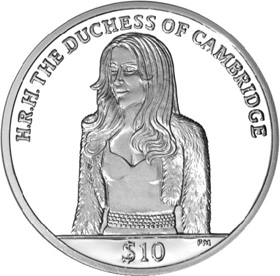 The two coins, which are struck by the Pobjoy Mint in the United Kingdom, carry charming and at the same time, informal portraits of the Duke and Duchess in evening attire. On the evening of their Wedding Day HRH The Prince of Wales, the Duke of Cambridge’s father, hosted another reception for 300 of the couple’s closest family and friends, which was a black tie affair held at Buckingham Palace. For this event the Duchess of Cambridge wore a white satin dress with a soft angora cardigan, while the Duke of Cambridge wore a traditional dinner suit. It is this evening attire and those images that appear on the reverse of the two coins, with each facing each other from their own separate coin.

The obverse includes a double effigy of Queen Elizabeth II which includes a previous rendition of the Queen as she appeared in 1953 on British coinage, as well as how she is depicted today. This commemorative obverse has been produced especially to celebrate Her Majesty’s Diamond Jubilee Year.

The coins are struck in three versions, a one dollar cupro-nickel crown, a ten dollar sterling silver crown, and a 12 gram fine silver crown which carries a five dollar denomination. All coins have a diameter of 38 mm. The ten Dollar coin has a weight of 28 grams and both the five and ten dollar coins have a mintage of 10,000 each.

For more information on this and other coins issued by the British Virgin Islands, please visit the website of the Pobjoy Mint at: http://www.pobjoy.com/ukworld/page.php?xPage=index.html