The Banco Central do Brasil has launched (11th August) their first coins to mark the XXXI Olympiad, which will be hosted by the city of Rio de Janeiro in the summer of 2016. This occasion marks the first time in modern Olympic history that the games will be hosted on the continent of South America.

Following the closing ceremonies on the 12th August in London for the transfer of the official Olympic flag between the mayors of London and Rio de Janeiro, the banner made its way to the Brazilian city and landed the following day. The IOC and its Brazilian counterpart will now begin the task of preparing for the next summer games – four years from now and in the southern-most city to ever stage the Olympiad.

The coins struck by the Brasilian State Mint include a collector’s quality silver crown and a bi-metallic circulation coin which share the same obverse design. The obverse depicts the Olympic flag in the center flying along with the official logo of the Rio games which includes the five Olympic inter-locked rings. Above the flag is the year of issue “2012” and the TEXT “ENTREGA DA BANDEIRA OLÍMPICA” (Delivery of the Olympic Flag). The reverse of the silver coin includes a clever stylized depictions of two of the host cities most notable landmarks – that of the Tower Bridge representing London and to the right, the iconic statue of Christ the Redeemer, which looks over the city of Rio de Janeiro from Sugarloaf Mountain. The text “LONDRES 2012 – RIO 2016” is positioned above the primary design towards the left – center. The denomination of 5 Reais is placed in the middle of the two representations. The silver coin, produced in proof quality, is struck in .925 fineness with a weight of 27 grams and a diameter of 40 mm. A total of 20,000 pieces has been authorized. 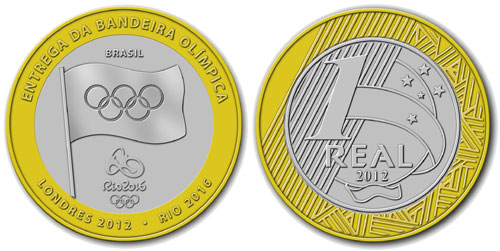 The reverse design of the one Real coin shows the coin’s denomination with a numeral and also includes elements of the Brazilian flag. The one real coin will be available in a specially produced FDC quality strike of up to 80,000 pieces. A greater quantity of 2,016,000 coins will be distributed into general circulation.

The Banco Central do Brasil are offering the silver coin to collectors through their regional offices nation-wide and also on their website though, no international orders can be fulfilled. For more information on these new coins, please visit the website of the Banco Central at: http://www.bcb.gov.br/pt-br/Paginas/banco-central-lanca-moedas-comemorativas-em-homenagem-a-entrega-da-bandeira-olimpica-ao-brasil.aspx