The Imprensa Nacional Casa da Moeda have issued in September, two coins marking the 25th anniversary of both Portugal and Spain’s entry into the European Economic Community, later the European Union, which occurred on the 1st January 1986. The coin set includes one gold and one silver minted for the occasion. The silver coin is denominated as €10 and is designed by sculptor João Duarte. The obverse depicts the Portuguese coat of arms together with a representation of coin blanks and hole-punched flat metal. The text “REPUBLICA PORTUGUESA” is positioned in a semi-circle to the upper left half. The reverse borrows its inspiration from the obverse and illustrates a portion of sheet metal, hole-punched with coin blanks cut out and the scripted initials “UE” superimposed over the primary design. The text included reads: “XXV ANIVERSARIO DA ADESAO DE PORTUGAL E ESPANHA A UNIAO EUROPEIA”. The commemorative years “1986” and “2011” along with the coins value and mint’s initials of “INCM” completes the design. Struck in sterling silver and to proof quality, the coin weighs 27 grams and has a diameter of 40 mm. A total mintage of 7,500 coins has been authorized. 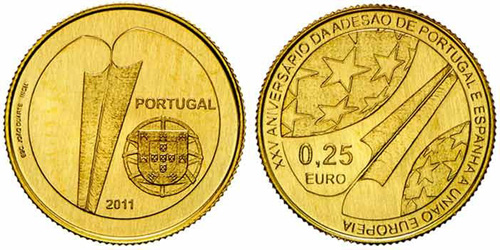 The gold coin coin with a face value of 25 €URO- cents, (€0.25) includes a design of the curled edges of two scrolls coming forward into the foreground where they meet, conveying the idea of the two countries. The Portuguese coat of arms and the year of issue “2011” are also included. The reverse carries a similar imagery of the two scrolls, depicted here together with star-studded spheres, bringing to mind the current European Union. The text around the primary design is the same as that depicted on the silver counter-part. Struck in pure .999 gold and to proof quality, it weighs 1.56 grams and has a diameter of 14 mm. The INCM have authorized 12,000 pieces for distribution.

The two coins are being coordinated as a joint issue with the Royal Spanish Mint, the Real Casa de la Moneda.

For more information on these and more coins offered by the Imprensa Nacional Casa da Moeda, please visit their website at: https://www.incm.pt/site_en/loja?type=produto_detalhe&codigo=102135. The information is available in English.