The Royal Mint has announced a new two-coin set which will be issued in tribute to the 50th anniversary of the death of the country’s war-time leader, Sir Winston Churchill, who first served as Prime Minister of Great Britain during the war years from 1940 until the post-war election in 1945. Widely considered one of the great leaders during the Second World War – even of the 20th century, he was a man of many talents. He was a historian, an author, and an artist. Sir Winston is the only British Prime Minister to have won a Nobel Prize in Literature since its inception in 1901 and was the first person ever to have been declared an honorary citizen of the United States. Born into the British aristocracy, he was a member of the family of the Dukes of Marlborough which is a branch of the Spencer family. His father, Lord Randolph Churchill, also a politician who served as Chancellor of the Exchequer; his mother was Jennie Jerome, an American socialite.

At the forefront of politics for fifty years, he held many political and cabinet positions. Churchill was first named a cabinet Secretary in 1910 and worked his way up the ladder in the conservative and Liberal governments of several Prime Ministers. Sir Winston also held the position of First Lord of the Admiralty which he was appointed to twice, first in 1911 and the second in 1939. A fierce and early opponent of Nazi Germany and their rearmament, he lead the warnings of what he saw as a threat to the security to Europe. After the invasion by Nazi Germany of Poland in 1939 and Britain’s subsequent declaration of war, Neville chamberlain, who had signed the declaration – resigned in 1940 and Winston Churchill became Prime Minister of a coalition government which was to last for the duration of the War. After elections following victory in both Europe and Japan, the coalition government was replaced with a labour government which was in turn, replaced once again in 1951 with a government headed by the hero of World War II, Sir Winston. Upon the death of King George VI in 1952, Sir Winston became the first Prime minister in service to the young Queen Elizabeth II. Sir Winston retired from politics in 1955 and embarked on a series of tours and public speaking engagements around the world. Sir Winston coined the phrase “The Iron Curtain” when he described the many governments in Europe who were denying the process of democracy to their people after the war and had predicted the cold war where the ideological and even military battles would be set against the United States and western Europe and the Soviet Union along with its satellite countries. 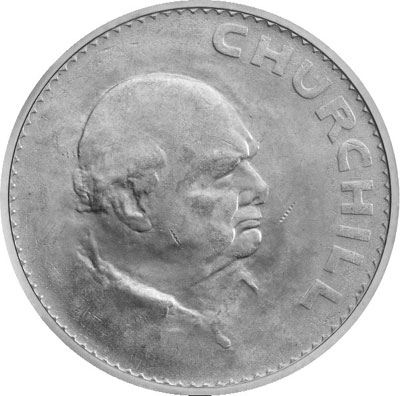 With his death in January 1965 at the age of 90, Queen Elizabeth II granted him the honor of a state funeral, which saw one of the largest assemblies of world statesmen in history. A commemorative crown of 5 shillings was issued later in the year which was the first time ever that a commoner appeared on British coinage, this is the very crown which is included in the Royal Mint’s two-coin anniversary set along with the new £5 crown. 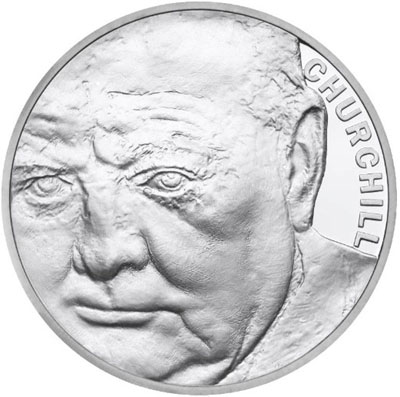 Designed by Mark Richards, the coin includes a new depiction of the man nicknamed “The Bulldog” A front-facing partial portrait is utilized which is primarily positioned towards the left half of the coin. The bold letters “CHURCHILL” are placed along the upper right corner, in a similar fashion as the 1965 version. The obverse of the coin carries an effigy of Her Majesty Queen Elizabeth II by Ian Rank-Broadley. The 2015 dated coins will also undergo a portraiture change later on in the year. The two coins are presented in a green card box and are individually encapsulated. The specially prepared anniversary set also comes with a small booklet highlighting the outstanding aspects of the great man’s life.

For more information on this set which now available for pre-ordering and other products on offer from the Royal Mint, please visit this section of the Royal Mint website. Information offered in English, international orders dispatched.