Two-cent pieces were first made in 1864, at a time when small change was scarce in circulation. In the following year, 1865, the shortage had abated and the nickel three-cent piece was introduced. Mintage quantities for the two-cent piece fell sharply, with 1872 (as illustrated here) being the last year they were struck for circulation. A while back we received this surprising and interesting letter from David Rogge that included an article from 1880 that revealed that two-cent pieces were in active use in the Midwest at that time, quite different from our assumption that such pieces were rarely encountered other than on the East Coast. David wrote:

“I recently came across some fascinating numismatic history that I thought you would be interested in. My father-in-law sent me a copy of the first issue of my hometown paper, The Kansas City Star, dated September 18, 1880. As I read the interesting details of a day in Kansas City life in that year I found two small ads or news items; I was at first unsure which.

“ ‘PENNIES AND TWO CENT PIECES Furnished in amounts to suit, at the office of The Evening Star, Nos. 407 and 409 Delaware Street.’ 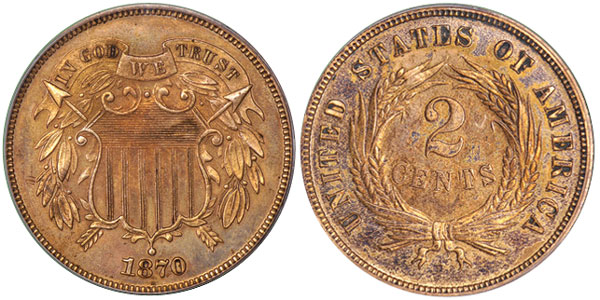 “At first I was perplexed as to what this meant. Why would the newspaper be selling two-cent pieces and pennies? They surely were not in the banking or coin dealing business. What was the underlying story?

“As I concluded my reading of the paper, still pondering the coin retailing mystery, I happened to glance at the paper’s headline banner and saw this: ‘Price, Two Cents.’

“Suddenly, all was clear! The newspaper was trying to trade out its no doubt overflowing coffers of pennies and two-cent pieces that were received through its newsstand employees during daily sales! What an interesting, serendipitous discovery this was for an old two-cent collector!

“Now this immediately brings to mind a couple of interesting observations.

“1. I always assumed that two cent pieces, being relatively obscure members of circulating coinage, likely never got too far from their birthplace, Philadelphia and the East Coast.

“2. My understanding of two cent history was that the two cent piece was never popular and as a result was an uncommon find in everyday usage. Nevertheless, here, fully seven years since the last two-cent piece was coined, we are finding that they were apparently being used quite commonly in daily commerce in 1880! And in my old hometown, of all places!

“I was very happy to have stumbled onto this bit of numismatic trivia and it has made my two cent collection all the more relevant and personal to me as a result. Hope you enjoyed this.”

QDB’s comment: Surprising to us! ‘Conventional wisdom’ has it that, indeed, the East Coast was the main place for their use. Thank you so much.