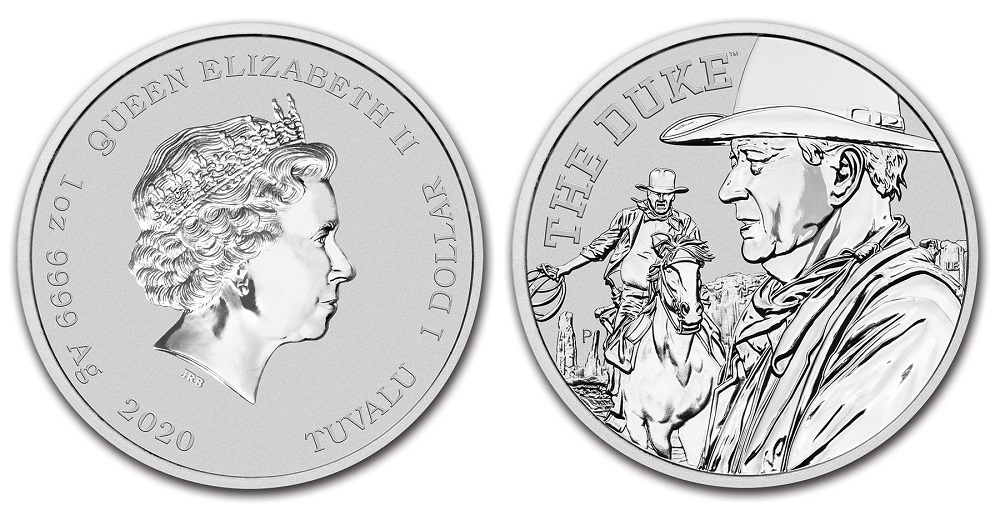 The government and treasury of Tuvalu have released new silver one-ounce coins in honour of American actor John Wayne, a staple of the Western film genre who starred in, directed, or produced more than 170 movies in a career spanning over 50 years. Throughout the many films he appeared in, John Wayne remains one of the most endearingly popular American entertainers of the 20th century.

Born as Marion Michael Morrison on the 26th May 1907 in Winterset, Iowa, he was the older of two children born to Clyde and Mary Morrison. Wayne’s family moved to Glendale, California, when he was about 10 years old and as a student, he excelled in classes and many different activities, including student government and football, while also participating in numerous student theatrical productions. Showing talent as a sportsman, Wayne won a football scholarship to the University of Southern California and started college in the fall of 1925. Unfortunately, an injury took him off the football field, which also ended his scholarship. While in college, Wayne had taken some work as a film extra. Now finding himself out of college, Wayne worked as an extra and a prop man in the film industry full time. Tall, athletic, and good-looking, it was at this time that he received his big break, being cast in his first leading role in a movie entitled The Big Trail, in 1930. It was at this time that Wayne received the name he would be known by for the rest of his life: John Wayne. His next big break was in Stagecoach in 1939, which would receive seven Academy Award nominations and Wayne’s persona as a Western character was well and truly established. His work also included roles as an action hero, military man, a romantic lead, and behind the scenes as a director and producer.

Wayne had been nominated for an Academy Award three times during his career, in 1949, 1961, and 1969. With his last nomination, He won his first Academy Award for Best Actor for his role in the movie entitled True Grit. John Wayne’s last film, entitled The Shootist, was filmed in 1976 and he was cast as an aging gunfighter who learns that he is terminally ill. The role would be quite prophetic as Wayne would also be diagnosed with acute stomach cancer just two years later. He succumbed to the illness on the 11th June 1979, when his death was announced. He was 72 years old.

“The Duke” as he was known to his friends, received the nickname when he was a young boy, as his dog was named (known as “Little Duke”). The gold medal award was approved shortly before his death and was presented to his family posthumously. 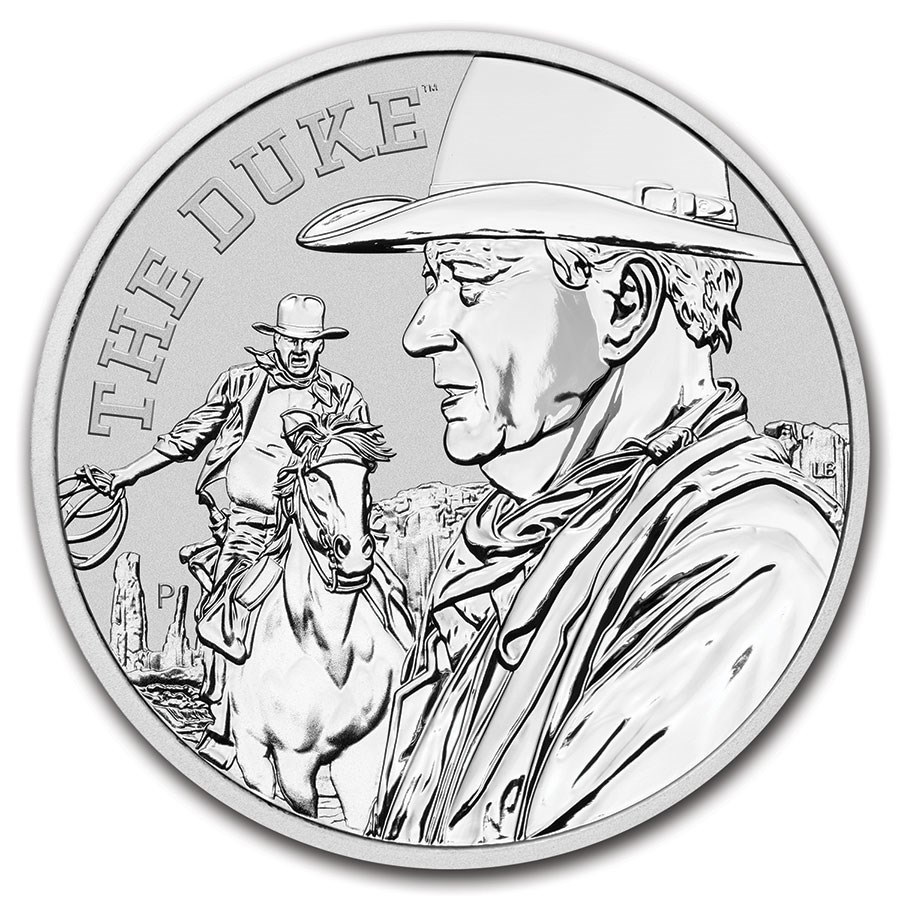 The Perth Mint produces the coins at their facilities in Australia on behalf of the treasury of Tuvalu. The reverse side portrays John Wayne in profile wearing his trademark cowboy hat against a representation of the Hollywood legend on horseback. The design also includes his nickname THE DUKE and The Perth Mint’s traditional “P” mint mark, seen to the lower left. 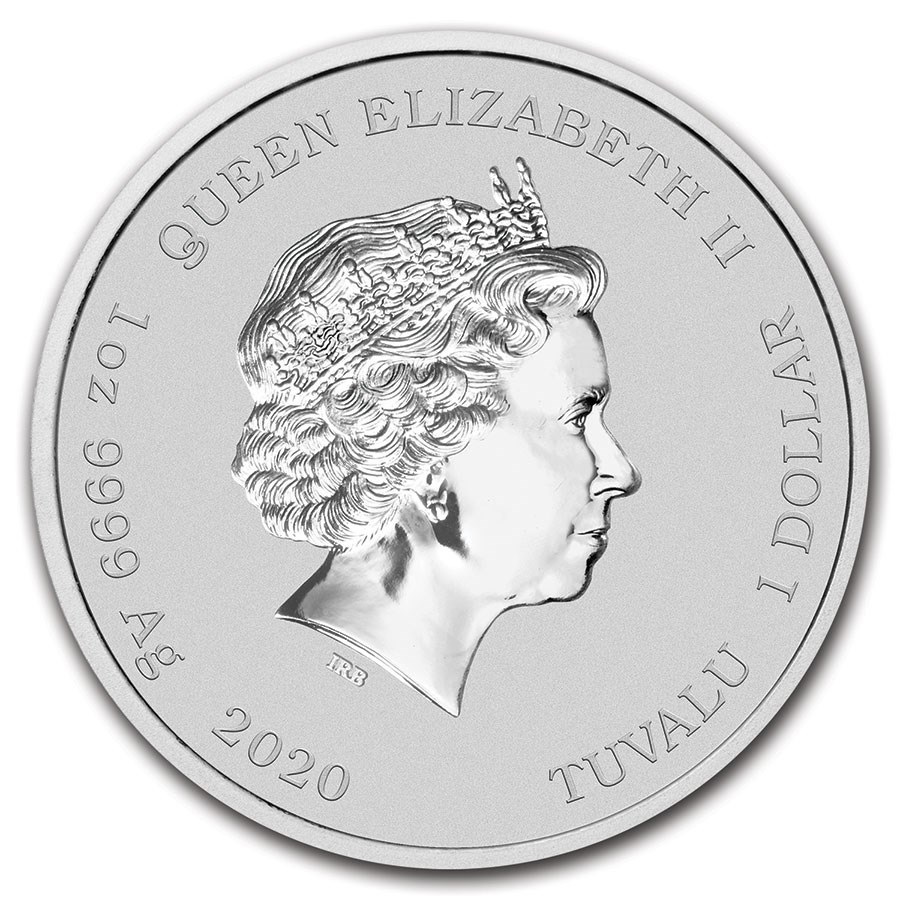 The obverse depicts an effigy of HM Queen Elizabeth II created by Ian Rank-Broadley. The denomination of ONE DOLLAR, the coin’s weight and fineness, and the year 2020, are also included. 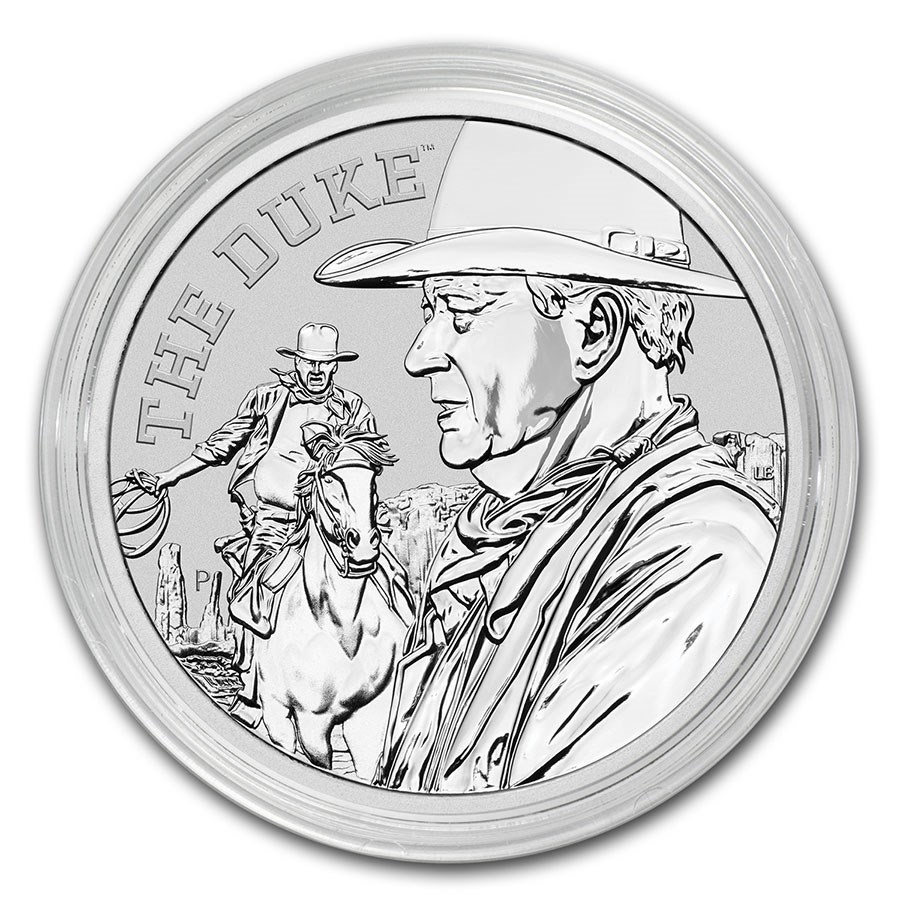 The bullion-strike quality coins are individually encapsulated and are available as a separate one-coin purchase or in multiples of up to 100 pieces. For additional information about these coins, please visit the website of AMPEX.

JOHN WAYNE, DUKE, THE DUKE and the John Wayne name, image, likeness, voice, and all other related indicia are the intellectual property and exclusive trademarks of the John Wayne Enterprises, LLC.