The Bank of Latvia have struck (28th May) a very special coin, which marks the 90th anniversary of the first currency issued by an Independent Latvia who established their own state in 1918. The Latvian currency, the Lats, was first issued in 1922 with the first coins in denominations of 5, 2 and 1 lat silver coins having been originally produced at the Royal Mint from 1929 to 1932. 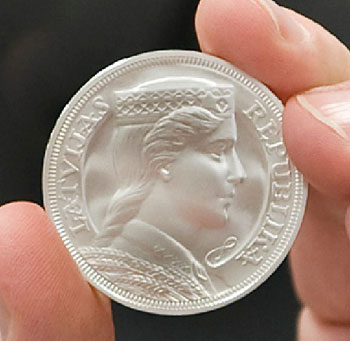 In the presence of the Governor of the Bank of Latvia, Mr. Ilmars Rimsevics and the Latvian ambassador to the United Kingdom, Mr. Eduards Stiprais – 5 Lati coins carrying the original design by Rihards Zariņš, a prominent Latvian graphic artist of the era, were struck at the Royal Mint’s state-of-the-art facility in Llantrisant, Wales.

Monday’s visit was hosted by Royal Mint Chief Executive Adam Lawrence who commented, “We are very proud of The Royal Mint’s 90 year history with the Bank of Latvia and the important role our coin design has played in helping to preserve the national identity of the Latvian people.”

The visit also also included a viewing of Rihards Zariņš  90 year old sketches and design drawings for the original Lats coins which are held in The Royal Mint museum.

The crown-sized silver 5 Lati pieces, well known and admired by world coin collectors, were originally issued in 1929, continued in circulation until WWII, and were a popular symbol of independence during the Soviet era. The 5 Lats silver coin remained a symbol of Latvian freedom and sovereignty, secretly stored by almost every Latvian family as a reminder of their national identity. 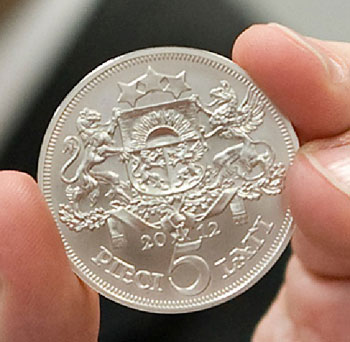 This tribute coin, which reproduces the original 5 Lati coin, depicts Zariņš’ allegorical female representation of the nation along with the text “LATVIJAS REPUBLIKA” around the primary design. The reverse includes a depiction of the national coat or arms, also designed by Rihards Zariņš, along with the denomination and year of issue, “2012” just below the crest and above the numeral “5” representing the coin’s value.

A total mintage of up to 10,000 pieces has been authorized by the Bank of Latvia. The Bank will announce when the coin will become available to interested collectors, expected later on this year. For more information on the specifications / dimensions and other coins offered by the Bank of Latvia, please visit their website at: http://www.bank.lv/en/money/silver-coins