From the gold stater of King Croesus for 63,250 EUR right through to the coin set of the People’s Republic of China for 20,700 EUR – it would seem that just about all coins and medals are currently very much in demand! The top piece turned out to be an aureus of Pompeius that sold for a very substantial 161,000 EUR.

The last years have seen a strong increase in the rush for objects of permanent value. Gorny & Mosch’s most recent auction would seem to attest to just how hot the current climate is for investing in numismatic valuables. Prices were consistently high throughout, whether for ancient or modern coins, premium objects in the six figure range, or even just for “normal” coins valued at just a few hundred Euro.

Sheer beauty was and still is the overriding criteria by which collectors evaluate Greek coins. It was easy to see this appraisal of beauty at work with two staters of the Amphictyony of Delphi, minted around 346. While the first extremely fine piece featuring the most superb of patinas climbed from its estimate of 25,000 EUR to a much higher 57,500 EUR*, the second, not-so-perfect piece remained at its opening price of 9,200 EUR. The buyer must have been very pleased with himself – he nabbed a real rarity for a more than reasonable price.

The buyer of the heavy gold stater of Croesus must also have been thrilled with his purchase. For 63,250 EUR, he managed to acquire one of the best-preserved pieces of this incredibly important historical issue (Estimate: 45,000 EUR).

Also particularly impressive was the interest expressed for the rulers of the Middle East, led by a drachm of the Cappadocian king, Ariarathes I. The piece sold for 10,925 EUR, a significant increase from its estimate of 4,000. Things went much the same for a perfect tetradrachm of Antiochus II Theos – the extremely fine piece went for 10,350 EUR (Estimate: 4,000 EUR). And yet, even pieces that weren’t all that rare fetched top prices, so long as the condition passed muster. Take, for example, the final price for a common, but perfect tetradrachm from Demetrius I with high relief – estimated at just 500 EUR, it sold for 2,070 EUR.

Seeing as the Middle and Far East are steadily attracting more and more interest, the price realized by a unique drachm of Bivasar, a ruler of the Afrighids who reigned in Chorasmia around 300-350, came as no surprise. The piece, estimated at 1,600 EUR, sold for an impressive 10,925 EUR.

As astonishing as these other prices were, the real surprises were yet to come with the Roman coins. Roman gold in outstanding condition is currently bringing in incredible amounts. Take, if you will, the portrait aureus of Sextus Pompeius, which brought in an amazing 161,000 EUR, far eclipsing its estimate of 40,000 and becoming the most expensive piece of the entire auction. The piece of Empress Matidia, carrying the same estimate, was forced to concede defeat with a final price of “just” 126,500 EUR. The extremely fine aureus of Pertinax from a 1965 Hess Auction changed hands for 63,250 EUR (Estimate: 20,000 EUR), and a perfect aureus of Nero sold for 46,000 (Estimate: 15,000 EUR). 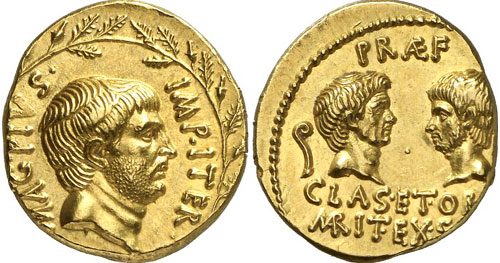 The Byzantine pieces were, of course, also good for an impressively high price or two. A solidus of Theodosius III, for example, climbed from an estimate of 3,500 all the way to 9,315 EUR.

The Oberländer Collection of electrum fractions ranging from the 1/192 stater to the stater brought things back down slightly, offering something for the collectors of more modest means. Although, even here, quite a few customers spent more than expected for some items, such as for an early electrum stater from Miletus. The rare, very fine variety changed hands for 8,050 EUR (Estimate: 1,500 EUR).

In order to sum up the outcome of the second auction, it’s important to emphasize that great increases were once again recorded just in the long-neglected mid-range segment. The pieces in the auction were estimated at 600,000 EUR. Overall final sale prices were closer to 740,000 EUR.

Collectors with specialized knowledge and particular historical interest really flocked to the Roman coins. Here, a denarius of Brutus featuring the inscription EID MAR – pierced, subaerati, an unofficial issue and very fine at best – still brought in an impressive 4,370 EUR instead of its estimated 1,200.

For the specialty collector, two other prices beg mentioning here: an extremely fine antoninianus of Probus climbed all the way from 100 EUR to 1,725 EUR, and a 40 nummi piece of the Heraclii, minted in 610 in Alexandria, went all the way up from 400 EUR to 1,610 EUR.

Although the coins and medals from medieval and modern times did not fetch quite the same high prices as the ancient ones, the final prices were still of note. To look at a few examples: an extremely fine to FDC quintuple Bavarian ducat of Maximilian I from 1640 of the refortification of the city of Munich sold for 12,650 EUR (Estimate: 7,500 EUR), a quintuple ducat of Frederick Wilhelm I of Prussia of the 1721 homage in Stettin brought in 29,900 EUR (Estimate: 20,000 EUR), and an undated Ulm ducat from 1647 sold for 27,600 EUR (Estimate: 15,000 EUR). This last price realized for the very fine, slightly bent piece with light file marks around the edge is actually downright modest when one considers the fact that this rarity last came on the market during the thirties.

Following a somewhat lean period, gold and silver coins of the German Empire have bounced back strongly. This is evident not just in the expensive premium pieces, but also at average prices; the overall estimate was a very realistic 82,000 EUR, but total final sale prices were more in the range of 120,000 EUR. Of almost 180 pieces, only two were not sold. And the prices were quite reasonable throughout. To give just one example, a 20-mark 1903 piece from Waldeck-Pyrmont, with a scratch in very fine to FDC, was estimated at 5,500 EUR. It ultimately sold for 6,900 EUR.

There were several special collections to be found among the European coins, such as a collection of Polish coins from the estate of Adolf Kargel. The consignor should be more than satisfied with the outcome – the final accepted price of 62,000 EUR was practically three times the original estimate of 24,500 EUR. Also particularly worth highlighting here is a 1699 medal of Augustus I by M. H. Omeis of the capture of the fortress of Kamieniec-Podolsk. Despite an original estimate of 4,000 EUR, its new owner had to pay a significantly higher 8,050 EUR. Except for three lots, everything was sold, and mostly – even just in the two-to three-figure range – for multiples of the estimate.

A batch of Chinese commemorative coins after 1979 experienced much the same sort of results. Estimates here were already quite reasonable, but even so, there were outliers when it came to certain pieces. Take, for example, a bi-metal coin minted on the occasion of the 1996 Munich International Coins Fair – the piece of 1/4 ounce gold and 1/8 ounce silver, estimated at 500 EUR, sold instead for 1,840 EUR. A rare coin set from 1995 in gold brought in a very respectable 20,700 EUR, far exceeding its estimate of 3,500 Euro.

* All prices realized include a 15% buyer’s premium.