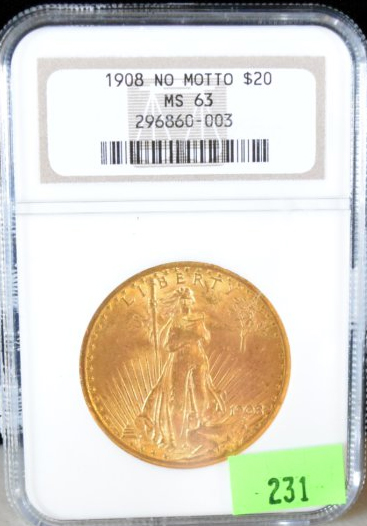 Because Coin Update readers bid and buy coins online, every now and then we canvas the numismatic community to see what is selling, what is not, and how folks can profit from the information as hobbyist and/or investor. As you can see from the above photo, one of the best buys now are NGC/PCGS mint-state Saint-Gaudens $20 double eagles. I won the 1908 no motto MS-63 pictured here with a bid of $1,100, or $1,298 with buyer’s premium. It is tucked safely in my bank box, as are all my coins. NGC values this coin at $1,840. When the price of an ounce of gold was $1,700 in January 2013, about 2 1/2 years ago, the coin would have cost $2,500, or $2,950 with BP.

Chester’s Coins and Gifts in Ames, Iowa, where I live, has sold out of Saints. Almost every dealer contacted for this article said the same.

The news from most dealers, however, was not good.

C.B. Strumpher, Decatur Coin and Jewelry, says he hears from several dealers about the current coin market being “in serious trouble. Several are comparing it to the disastrous 1991 coin market. The drop in gold and silver is contributing to a big part of the decline. My chart projections are (technically) calling for much steeper declines in both metals in short order.” His shop is primarily selling “our common average material–which we do buy a lot of here–to dealers. When they stop buying, I’m not sure who we will sell to.”

That said, he recommends looking for sharply struck and colorful Morgan dollars and Silver Eagles. “I do look when I am on the show circuit but don’t find much available out there in coin land. My thoughts are that the really high eye appeal coins are in strong hands or are going that direction and that the prices for those kind of coins will double at a rate of every 3-4 years, even in this market, because of those strong hands. I have been to several major shows as of late and find it increasingly difficult to find, let alone buy, nice looking material. What is out there is average or below average and that stuff is in vertical decline.”

Strumpher also sells on eBay. Here is one of his magnificently colored Silver Eagles with an asking price of $5,000. 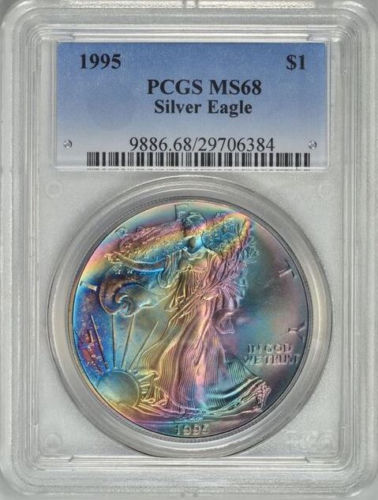 Chris Seuntjens, owner of Christopher’s Fine Jewelry and Rare Coins, which he opened in 1980, loves the hobby as does Strumpher. Both are collectors, and Seuntjens’ love of numismatics dates back to his boyhood. “I believe I started collecting coins when I was about five,” he states. “I found a 1919-S penny in my red penny pot that Mom had given me. Of course I thought this was worth big money and I started going through Mom and Dads’ change. Dad bought me Whitman coin folders at Coast to Coast to put my collection in. Whenever we had a family function, my relatives would come with their pockets full of change for me to go through.”

His love of the hobby eventually led to his business, which ranks among the top shops in the Midwest. Seuntjens feels the same way as Strumpher about the current coin market.

“With the declining prices of gold and silver we have seen a nice increase in customers buying precious metals,” he notes. “The coin market in general does seem quite slow. While the shows are getting slower, we have increased the number of shows we do to make up for lack luster sales in the shop. We have lowered our buy prices on many types of coins that are slow to sell. We are sitting on a lot of material that seems to draw no interest from the public or dealers.”

Suentjens says right now that US gold in MS-63 and better condition “is one of the most undervalued coins on the market. Prices for many US gold coins are at recent historic lows. Another coin that I think is a bargain is Walking Liberty halves in MS-65 and better condition, and MS-66 and MS-67 Morgan dollars.”

An MS-67 1879-S Morgan, one of the more readily available coins at high mint state in the series, has been selling recently below $600, about $150 lower than a year ago. For instance, this NGC coin sold for $587.50 (realized price!) at the Stacks Bowers July 2015 Baltimore auction.

When I bid via Proxibid on Walker halves in the 1940-47 series, I typically only place a maximum of $65 to $80 dollars, depending on the coin, and only if it is slabbed by NGC or PCGS. Anything higher is a potential loss when buyer’s premiums range from 17%-20%.

Dealers contacted for this article believe the downslide began with the collapse of the Tulving Bullion Company, which purported lost $40 million, in March 2014.

In a memoir, the semi-retired Suentjens compares this time in numismatics with the crash of the coin market in 1983.

“The coin market really started to take a dive in 1983,” he writes. “What I had learned was that during the gold and silver boom of 1979 and 1980 many dealers were using their profits to buy rare coins. When the gold and silver markets crashed, their cash cow went out to pasture and they started dumping their rare coins to keep their businesses going. It was common to see dozens of coin dealers at a coin show walking table to table with their inventories to find buyers. You could literally look at double row boxes of coins all day and every day at a coin show.

“Coin prices were falling on a weekly basis and customers were few. A dealer friend of mine had 6 – 1936 proof sets at the Central States show in Lincoln, Nebraska, valued at $10,000 each. By the end of the show they were worth $6,000 each.

“My cash flow situation at the store became so bad that I took a box of coins to the Long Beach Coin Show for liquidation. I had $18,000 invested in this box of coins. I had to sell them at any price to keep my shop open. It was very difficult to get anyone to bid on my coins. I eventually sold them for $6,000.”

Of course, a down market for coin dealers is a great one for auctioneers like Ian Russell, founder of GreatCollections. I respect Ian, former president of Teletrade, for starting up a site that increasingly registers record prices in the coin business. (Stack’s Bowers combined Teletrade and Spectrum in 2013.)

According to Russell, “Walkers seem very cheap right now. They have decreased in value over the past year. This is the time in my opinion to start to accumulate weak areas of the market like Walkers, if they are in nice condition–even CAC coins are down. Be patient though.”

Investors are recognizing the down market, he adds; so even summer months are busy because of bargains. “I think we should thank the Internet for opening up the coin market for 24/7 trading,” Russell says. “We will have auctions every Sunday, even on Super Bowl Sunday, Easter, and so forth, and still thousands of bidders turn up.” 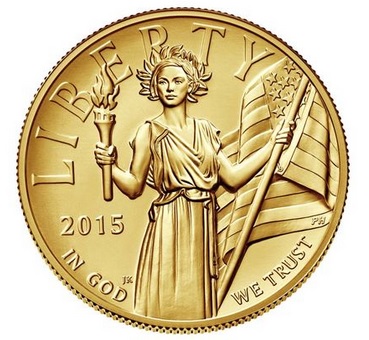 In the modern market, the 2015 American Liberty High Relief took a lot of money out of the market, Russell says, “and I am very encouraged by the Mint selling over 42,000 coins in the first few days of release. It seems certain to sell out, which is essential to the secondary market in my opinion. We are receiving inquiries from all around the world for this coin. It’s a very different type of demand compared to the JFK coin last year which was almost all speculators.”

As a member of the Citizens Coinage Advisory Committee, I can attest that my colleagues who helped select the design believed hobbyists would love this coin because of the iconic depiction of Lady Liberty. They were right.

Finally, Russell agrees with C.B. Strumpher that toned coins, primarily toned Morgans, are in high demand. GreatCollections sold a toned Kennedy for more than $2,000 in July.

I’m jumping on that bandwagon. But I’m buying cheap on eBay based on my knowledge of authentic toning, and then sending to PCGS and hoarding those beauties, like this one.