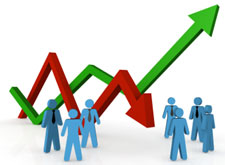 As I have repeatedly described, the monthly Bureau of Labor Statistics report on Non-Farm Payrolls (http://www.bls.gov/news.release/pdf/empsit.pdf) is highly misleading.  The latest version released today is a perfect example of what I mean.

The first sentence of the first paragraph contains the statistics that gained the widest publicity.  The first paragraph starts with, “Nonfarm payroll employment was essentially unchanged in June (+18,000) and the unemployment rate was little changed at 9.2 percent . . . .”

In this brief sentence, the reported statistics and the interpretation of the data are deceptive and incorrect.  I contend that this is done deliberately by the US government in order to lull Americans into complacency.  In other words, people who don’t realize just how bad the economy is will be less inclined to take measures to protect their wealth from being further plundered by the government.

Some of the mainstream media also mentioned that the 18,000 increase in employment was achieved in part by reducing employment reported for the prior two months by 44,000.  Had the prior adjustment not been made, the June figure would have showed a decrease of 26,000 jobs.

Now, the number of jobs isn’t the only statistic that matters in terms of employment.  What also matters is the average workweek of people who do have jobs.  In June, the average workweek for all employees declined by 0.1 hour to 34.3 hours (see BLS Table B-2).  So, not only were fewer people actually working, those who were working put in fewer hours!

Another statistic that the BLS reports toward the end of Summary Table A is the percentage of civilian non-institutional workforce that is employed.  For June 2011 that was 58.2%.  The last time there was a lower annual average percentage of the population employed was when 57.9% held jobs in 1983 (see page 194 of the monthly data release).

With unemployment data you see more of the same kinds of gimmicks.  The commonly quoted unemployment rate is from the U-3 definition.  This definition has been changed repeatedly over the years.    For instance, in 1994 the BLS changed the methodology so that long term unemployed people would no longer be counted among the unemployed.  This had the effect of substantially underreporting the number of unemployed and, therefore, the unemployment rate.

A more informative unemployment rate would be the U-6 definition, which includes people only marginally attached to the workforce or who are only able to obtain part-time employment but are seeking full-time work.  Where the June 2011 U-3 unemployment rate came in at 9.2%, the U-6 rate was 16.4%, not seasonally adjusted.  This was an increase from 15.4% the previous month!  Even on a seasonally adjusted basis, the U-6 rate increased from 15.8% in May to 16.2% in June.

By the way, I didn’t see any media reports yet that reminded people that the unemployment rate has now increased for the third consecutive month.  In March 2011, the rate was only 8.8%.

On page 46 of the monthly data release is table 30, Unemployed total and full-time workers by duration of unemployment.  This table only shows the annual averages for 2009 and 2010.  The average number of people considered unemployed for 52 weeks or longer in 2009 was 2,321,000.  For 2010, that figure rose to 4,298.000.  Remember, these numbers are tabulated after aggressively removing from the count millions of long-term unemployed people.  The percentage of the unemployed who were counted who have been out of work for 27 weeks or longer average 31.5% of all unemployed in 2009 but jumped to an average of 43.3% of all unemployed in 2010.

Even though the June 2011 jobs and unemployment report was not called a disaster, the results were bad enough that it made people more concerned that President Obama’s so-called economic recovery is a lie.  This fear translated into a decline in the value of the US dollar today and a significantly higher gold price.  On virtually every day when the US jobs and unemployment reports have been released in the past 4-1/2 years, the prices of gold and silver have been suppressed ahead of and during the announcements.  That both prices rose on the release of today’s news portends more bad days ahead for the US dollar.