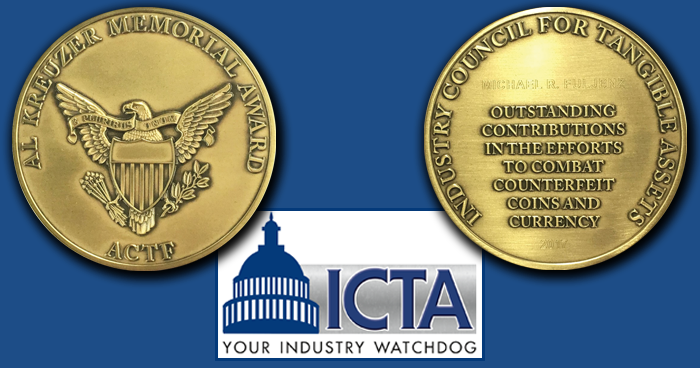 The Industry Council for Tangible Assets (ICTA) recognized three individuals on August 2 for their outstanding contributions in the effort to combat counterfeit coins and currency, and for their support of the Anti-Counterfeiting Task Force (ACTF).

Philip N. Diehl, Michael R. Fuljenz, and Chandra Kreuzer-Zell Rudd were the first recipients of the annual Al Kreuzer Memorial Award, which was presented during ICTA’s banquet in Denver, held during the American Numismatic Association’s World’s Fair of Money.

The ACTF award—in the form of a three-inch, antique bronze medal—is named for long-time California coin dealer Alan “Al” Kreuzer, who died in 2016. His business, Alan Kreuzer Rare Coins and Collectibles, was in Castro Valley, California.

Don Ketterling, a friend who often shared tables with Kreuzer at coin shows, told attendees, “I truly believe he would be proud to have this award in his name.” Ketterling noted that Kreuzer was instrumental in identifying counterfeit certified holders that had made their way around the Bay Area in recent years, and shared this portrait of the late coin dealer:

[Kreuzer] would often spend inordinate time helping others. At the same time, he did not have patience for anyone he thought disingenuous and could be abrupt toward those he thought of as ‘users’… [I]n particular, he truly hated those he determined were ‘thieves.’ Like many of us, he was difficult to get to know… [M]ost people didn’t really know him and many thought of him as gruff and short-tempered. Those of us who did, knew that he was honest with a proverbial heart of gold, and I considered him one of my closest friends.

Kreuzer’s daughter, Chandra, upon learning about ICTA’s establishment of the ACTF in January 2017, donated $50,000 in honor of her father. The donation played a key role in launching the work of the task force. She presented awards to the first two recipients: Diehl and Fuljenz.

Diehl, in the summer of 2016, jumped in with both feet to bring the ACTF to fruition. His timing was perfect. He was elected as the incoming chair of ICTA in August that year. It was his primary goal to bring together leaders from three different associations—ICTA, the Professional Numismatist Guild, and the American Numismatic Association—to create a task force. Guiding the “birthing” of the task force became virtually a full-time, unpaid job added to his position as president of U.S. Money Reserve. His knowledge from the political arena as former chief of staff for the Senate Finance Committee, former chief of staff of the U.S. Treasury, the 35th director of the United States Mint, and his experience in the business world during the past 20 years equipped him with a unique skill set to use in launching and guiding the ACTF in its formative year. ICTA salutes his insight, drive, and dedication.

Fuljenz, president of Universal Coin and Bullion, has dedicated many years to working with law enforcement to go after the “bad apples” who sell and distribute counterfeits to dealers, hobbyists, and consumers. He has worked directly with the U.S. Federal Trade Commission to produce consumer alerts. Most recently, he has worked with the attorney general of Texas to issue alerts and consumer advisories. Fuljenz is a dedicated member of the ICTA board of directors. He was among the first to voice support for the idea of a task force when it was initially discussed 18 months ago. The very day ICTA approved ACTF to come under its management, he pledged $10,000 as seed money to help kick it off. Within a week, ACTF was up and running because of the immediate infusion of cash. ICTA thanks him for believing in the ACTF’s mission and for putting his pocketbook where his heart is.

In a surprise move, Ketterling presented Chandra Kreuzer-Zell Rudd herself with one of the award medals, which was inscribed with her name. In thanking ICTA, she noted:

The medal is beautiful. I never realized that having it would be so meaningful. Thank you for presenting me with one… ACTF is not about me or my dad. Your mission is not to memorialize my father… and, yet, you were able to give me so much meaning and feeling of connection, I can’t express my thankfulness enough. You have much work ahead of you and I feel great knowing that he/we could give back something to the numismatic world that gave him so much joy.

Beth Deisher, ICTA’s director of anti-counterfeiting, announced that the high-relief, three-inch award medal was sculptured and struck by the Medallic Arts Company in Dayton, Nevada. The main design element on the obverse is U.S. Mint chief engraver Robert Scot’s Heraldic Eagle bearing the Great Shield of the United States, which graced the reverse of the $10 gold Capped Bust eagle struck from 1797 to 1804. She noted that one of Alan Kreuzer’s earliest specialties was early $10 gold pieces, and added that the design also has a special meaning in the current fight against counterfeits. “We thought it quite appropriate since our mission is to shield the United States from the counterfeit coins being manufactured and sold into our country, [and] that threaten our nation’s economy and its citizens.”