The Royal Dutch Mint have launched a three coin set, which includes coins of their country as well as those of Belgium and the United Kingdom, to observe the 200th anniversary of the Battle of Waterloo. The pivotal battle, which took place on the 18th June 1815 changed the fortunes of many nations on the continent by ending the strangle-hold of France’s Emperor Napoleon on many of its neighboring countries and paved the way for the Netherlands to re-claim their sovereignty and proclaim a new independent kingdom.

The Drie Landen Zilverset or Three Lands Silver coin set includes the coins from the Netherlands, Belgium and the United Kingdom, three countries of the many, whose futures were irrevocably altered or changed after the downfall of Napoleon in 1815. The Dutch silver coin also celebrates a second significant anniversary, that of the 200th year of Dutch independence and the creation of the United Kingdom of the Netherlands which also included the territory of present-day Belgium until 1830, where the town of Waterloo is located in. 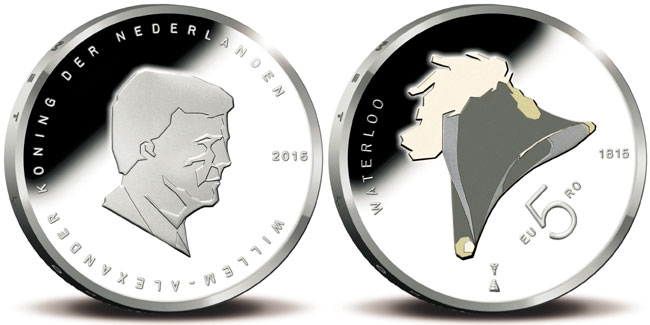 Netherlands: The €5 silver coin, designed by painter Marjolein Rothman who includes as the primary motif, the distinctive head-dress of the man who is known as the “Hero of Waterloo” that of the Prince of Orange who eventually went on to united the Dutch provinces into one independent kingdom as Willem I of the Netherlands. The Bicorn hat is placed in the center with the text “WATERLOO” to the left and the anniversary year of 1815 which placed to the right. The obverse includes a stylized or abstract portrait of HM King Willem-Alexander facing towards the right along with the year of issue “2015” which is placed to the right of the portrait.

Belgium: The €10 silver coin depicts a scene for The Battle of Waterloo within the main roles of General Gebhard Leberecht von Blücher, head of the Prussian forces, the Duke of Wellington, the Prince of Orange and their meeting on the battlefield. The reverse design includes the country’s name in the three official languages, French, Dutch and German encircling a stylized partial globe depicting the countries which make up the European Union along with a group of twelve stars representing the EU. The year of issue and denomination are positioned to the left half. 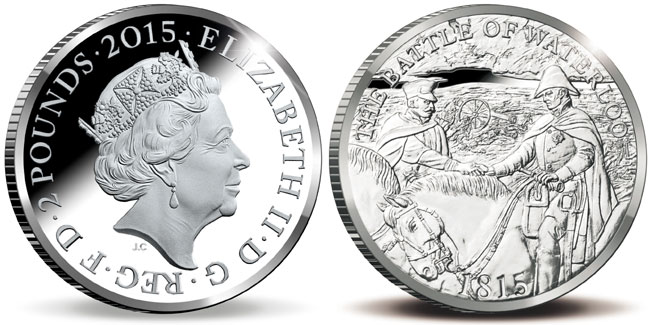 United Kingdom: This crown silver coin, designed by artist David Lawrence and features the moment of the handshake between a triumphant Duke of Wellington and General Gebhard Leberecht von Blücher, head of the Prussian forces, both men seen on horseback along with the remnants of the battle in the background. The text “THE BATTLE OF WATERLOO” is placed along the upper edge superimposed over the primary design with the year “1815” seen below the design. The obverse includes the effigy of HM Queen Elizabeth II, created by Royal Mint engraver Jody Clark. This coin was minted as a standard silver £5 crown earlier this year and is now being offered as a £2 denomination crown with an increased weight and silver fineness especially for this three-coin set.

The set is available for pre-ordering only from the Royal Dutch Mint. A first-strike ceremony will be held on the 15th June  for the five Euro coin and thereafter the sets and individual €5 Waterloo coins in varying separate options will begin distribution and dispatch directly from the Royal Dutch Mint. The Dutch €5 coin is available in both proof (.925 silver) and BU quality (silver-plated copper). A gold version of this coin is also available in proof quality and with limited mintage.

For more information on this and other coins offered by the Royal Dutch Mint, please visit their website at: http://www.knm.nl/waterloo Information offered in Dutch, orders sent to European destinations only.