The People’s Bank of China will issue (30th March) a series of gold and silver coins to mark the 30th anniversary of the first Gold bullion coins issued from the People’s Republic of China with the now familiar and popular “panda” design.

It was in 1982 when the world had seen for the first time, these new one ounce and fractional ounce pure gold coins to join the international market of bullion related coins for both collectors and precious investors. The coins carried playful depictions of one of the world’s most recognizable symbols of China and from this issue, these once- exotic coins became a great success with a silver bullion ounce coin joining the “Panda” family in 1987. Successive issues saw the People’s Bank changing the depictions yearly of these playful and endearing animals and a highly sought after series by dedicated coin collectors was well and truly launched.

The new commemorative coins consists of five denominations ranging from 2000 Yuan to three yuan and feature familiar elements previously included on past issues as well as some new designs specifically for the series. All of the coins feature the Hall of Prayer for Good Harvests, more commonly known as the Temple of Heaven. The text “30thAnniversary of the Issuance of China Panda Gold Coin” in Chinese characters appear below the Temple of Heaven and the text “The People’s Republic of China” appear above. The year of issue “2012” is positioned just below the base of the Temple. All gold coins are struck in .999 fine and the silver coins are also struck in .999 to proof quality. 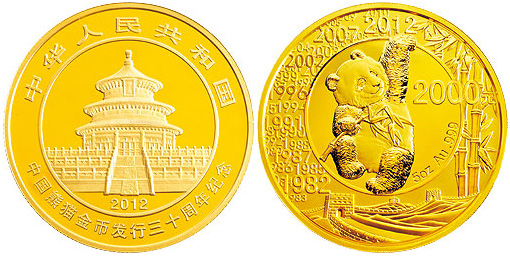 2000 Yuan – Obverse: The figure of a seated panda, with elements of the Great Wall and bamboos with a background montage of all of the years which the “Panda” coins have been issued. The text “5oz Au .999” and the face value of 2000 Yuan appear below the denomination. 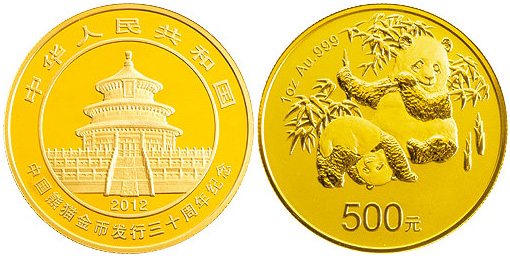 500 Yuan – Obverse: The image of two pandas, one in a somersault position, with decorations of bamboos. The text “1oz Au .999” is positioned to the upper left of the design and the face value of 500 Yuan appears underneath the pandas. 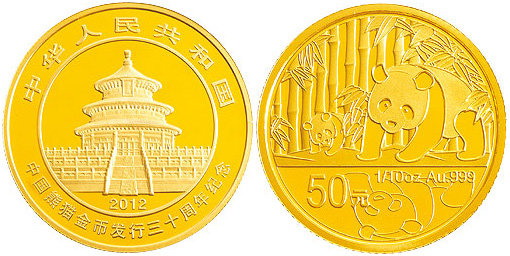 50 Yuan – Obverse: The figure of two pandas, one adult and one cub and their reflection in a lake with the decorations of an inverted pattern of a panda and bamboos, the text “1/10oz Au .999” and the face value. 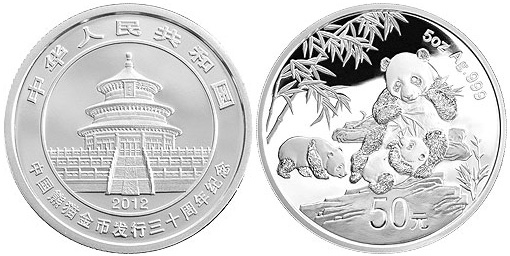 50 Yuan silver – Obverse: The image of three pandas, one adult mother and two cubs with decorations of rocks and bamboos, the text “5oz Ag .999” is positioned to the upper right corner with the face value of 50 Yuan positioned just under the trio of pandas. 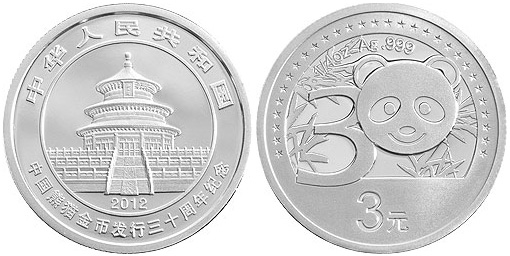 3 Yuan silver – Obverse: An animated design of a panda, symbolizing the 30th anniversary of the issuance of the Chinese Panda Gold Coins, with ornaments of bamboos and the text “1/4oz Ag .999” along the face value.

The coins are available at several approved distribution centers. For more information on these and other coins issued by the People’s Bank of China, please visit the website of the China Gold Coin Incorporation at: http://www.chngc.net/EnVersion/