The Royal Mint has unveiled (15th January) the theme of its third United Kingdom “£20 for £20” coin which pays tribute to the great British statesman Sir Winston Churchill. Twice Britain’s Prime Minister, and renowned the world over for his unyielding leadership and formidable character, Churchill is regularly voted as the ‘Greatest Briton’ in public polls.

The Royal Mint invited the Great-Grandson of Sir Winston Churchill to the “first-strike” ceremony. Randolph Churchill 49, the elder son of Sir Winston’s Grandson, also Winston (1940 – 2010) who was named after his famous grandfather, travelled to the Royal Mint’s headquarters in Llantrisant, Wales to attend the ceremony and witnessed the first of the silver £20 denominations rolling of the presses. 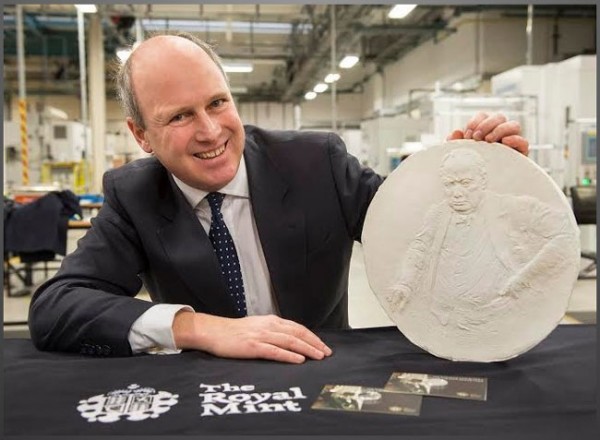 After the first coins were minted, Mr. Churchill posed along with the coin’s original plaster cast, used in the process of preparing dies for the minting presses. 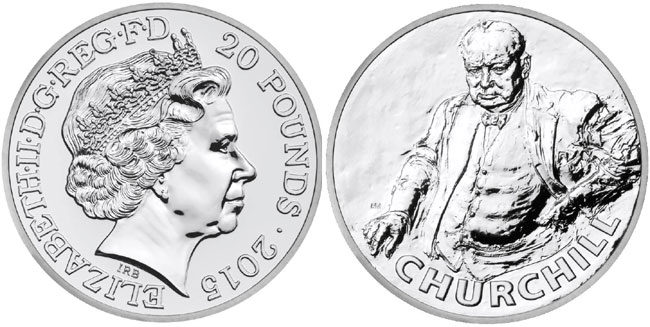 The reverse design of the Winston Churchill £20 face value silver coin is by figurative sculptor Etienne Millner, who took his inspiration from the celebrated photograph of Churchill captured by Yousuf Karsh in 1941. The coin bears the current portrait of Her Majesty Queen Elizabeth II on its obverse by Ian Rank-Broadley, which is to be retired this year.

The coin is the third in The Royal Mint’s popular £20 coin range and marks 50 years since the death of Churchill in 1965, when The Royal Mint first produced a commemorative coin in his honor. The first £20 face value coin, bearing Pistrucci’s classic St George and the dragon design, sold out rapidly after its release in 2013. Its successor was released in 2014 to mark the centenary of the outbreak of the First World War.