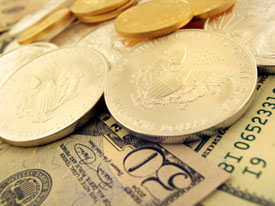 It has become clear to me that a lot more people have done their research and come to the conclusion that they should own some gold and/or silver as part of their total assets.

But, once you have come to that decision, then you have to choose the appropriate vehicle(s) to get into the precious metals markets.

In the past few months I have come to appreciate, much more than I ever have, that this second decision is far more intimidating to people than simply realizing that owning gold and silver is right for them. There are so many options that I have seen a number of people who end up doing nothing. Alternatively, I have also seen people who were steered in directions that did not suit their reasons for wanting to own precious metals.

I have a definite bias, being a buyer and seller of physical metals, so I remind readers that the following discussion may gloss over some of the positive reasons for possibly choosing to acquire metals in other forms. Feel free to do your further research.

With that disclaimer, let me review some of your options.

You could consider purchasing shares of stock in gold or silver mining companies. This route has some potential for great returns but also for disappointing results. Often, the returns depend more on factors other than the price of gold or silver. For instance, the caliber of a company’s management and operations can have a huge impact on stock prices. You also have to be concerned about environmental issues, political risk, and a number of other factors, which have nothing to do with the prices of precious metals. Rather than putting your full investment with a single mining company, many investors hold stock in multiple entities, hoping to reduce risk by this process.

Another factor to consider is that the profitability of a mine is determined over many years of production. There are limits to how much gold or silver a mine could sell onto the markets during a price spike. Invariably, the metals will be sold at their average price over a period of many years. This long-term realization of profits is why mining stocks typically do not rise by the same percentage when gold or silver prices are rising quickly. Conversely, when metals’ prices drop quickly, the stock prices also tend to decline by a lesser percentage.

Another option is to own shares of exchange traded funds that supposedly are devoted exclusively to owning either physical gold or silver. At the inception of an ETF, for example, one share of a gold ETF will typically represent the value of 0.1 ounce of gold while a share of a silver ETF will normally reflect the value of ten ounces of silver.

If this were exactly how the ETFs operated, they would be a really convenient way to own physical metals. However, be sure to read all the fine print in the prospectus issued by an ETF. What you will find is that the ETF invariably has no legal liability for any defaults by any sub-depositories that don’t have sufficient physical metal to meet their obligations. Further, find out if the ETF is authorized to lease its physical metal, which would add another risk of default of ever getting the gold or silver back. Last, check if the physical metal that the fund operator carries in its own vaults is considered to be what is known as unallocated metal. If so, you need to be aware that the metal supposedly owned by the ETF may be subject to superior claims of ownership by other parties. Altogether, there is more risk that the ETFs may not have the physical gold or silver to cover what it theoretically owes to its shareholders.

Because these are shares of stock of a company that is simply holding assets, shareholders are not charged an annual storage fee. As a result, most if not all ETFs see the value of one share shrink over time in how much metal they represent as the means to cover expenses. A gold ETF that started off with one share equal to 0.10 ounce of gold may now only represent 0.098 ounce of gold, for example.

You could purchase commodity contracts on the COMEX or other exchanges. Many investors buy such contracts on margin, hoping to magnify their results should the price rise on a long contract or decline if the owner holds a short position. If the market goes against this party, though, losses are also magnified.

However, keep in mind that the available inventories held to make contract deliveries only cover a small fraction of outstanding contracts. The inventories that do exist may also be subject to the claims of other creditors. The COMEX allows parties obligated to deliver on a commodity contract to alternatively pay cash or with shares of ETFs, with the owners of the contract having no say on how the contract is fulfilled.

Another option is to purchase London Bullion Market Association contracts. This is the largest gold and silver market in the world. In theory, these contracts are for the physical delivery of metal and are, therefore, 100% backed by the physical gold or silver.

However, in the Commodity Futures Trading Commission hearings held this past March, it was confirmed that there is only enough physical metal to cover 1 to 3% of outstanding contracts. Once again, the physical metal in the vaults may also be subject to claim of other parties. I have heard regular reports of contract owners being offered cash to settle gold contract delivery as the counter party simply did not have the metal to make proper delivery.

There are also certificate programs where bulk gold or silver is stored in a vault such as at the Perth or Royal Canadian Mint. Customers can buy fractions of the large bars, or in come instances, a portion of un-fabricated metal. Here again, there is the risk that this metal may be pledged as collateral to other parties.

These above forms are ones that I refer to as “paper” gold and silver. The owners do not literally own the physical metals but instead depend on the performance by another party to eventually convert their paper evidence of ownership into physical metal that they get to hold in their hands.

What I consider to be the safest option is to own physical metals in your own name, either in your personal custody or in segregated storage where the metal is considered your asset and not an asset of the storage company. Direct ownership of the real asset means you hold something that is not someone else’s liability.

However, owning physical precious metals does present the dilemma of safe storage. There is no perfect answer for everyone. If you secret the physical metals in your residence, you have some risk of burglary. If you put them in a safe deposit box, you may have trouble accessing it in event of a disaster. When a good percentage of the northeast US suffered an electricity blackout several years ago, banks were closed for several days, for instance. Physical metals in segregated storage in a secure vault may be a long distance away, and not practically accessible in an emergency.

I will go into more details another time about which physical metals may best suit your purposes. As a quick rule of thumb, for most people I usually suggest looking for widely traded forms that are highly liquid, where your cost is the lowest possible premium above the metal value. In other words, go for bullion-priced gold and silver rather than numismatic forms.

I almost always object to recommending the purchase of what the selling dealer describes as “semi-numismatic.” In theory, this is an item that costs the buyer a higher premium than strictly bullion-priced items, but supposedly has the prospect of selling for an even higher collector premium in the future. Of the products that have been marketed as semi-numismatic over the past three decades, almost all of them have been purchased at rare coin prices and liquidated at bullion prices. Many of them were actually bullion issues that the marketer chose to promote at a higher premium than other dealers were charging. There are occasional exceptions, but my best rule of thumb is to steer clear anytime you seen the phrase “semi-numismatic.”

By the way, in making this list, I do not intend to give the impression that ownership of only one category is necessarily the best option. Someone else may hold a core position of physical metals and also buy shares in promising mining companies. In addition, the time frame of ownership may affect the decision of which form to own. For someone looking for a very short term holding, say for just one week, ownership of an ETF with its low brokerage fees may be an optimum way to go.

With this information, I hope that some of you are able to take the second step from deciding to own gold and silver to actually making your acquisitions.