President Theodore “Teddy” Roosevelt was our 26th President. His Presidency started following the assassination of William McKinley; at age 42, he remains the youngest U.S. President. He is well-known for his participation in the Spanish-American War, leading the Rough Riders in battle on the island of Cuba. He formed the Bull Moose political party after realizing he would not win the nomination of the Republican party for the 1912 Presidential election. 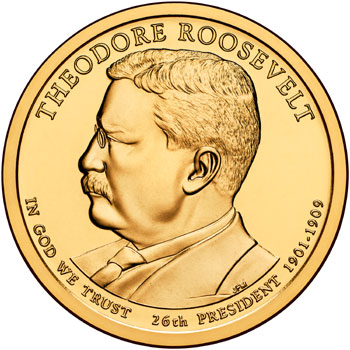 The coins bearing President Roosevelt’s image represent the twenty-sixth in the series of Presidential Dollar coins, and the second to be issued in 2013. The obverse depicts Roosevelt, the time in office (1901-1909), and the motto “In God We Trust”. The reverse shows the Statue of Liberty in the same design as been depicted on all Presidential dollars. The edge has the motto “E PLURIBUS UNUM”, the year of issuance, and the mint mark.

The Theodore Roosevelt Presidential Dollar will be released on April 11th, 2013. As Presidential Dollar coins are still being produced under the Treasury Department’s suspension of production of the dollar coin for general circulation. They will only be available directly from the U.S. Mint in the following products: