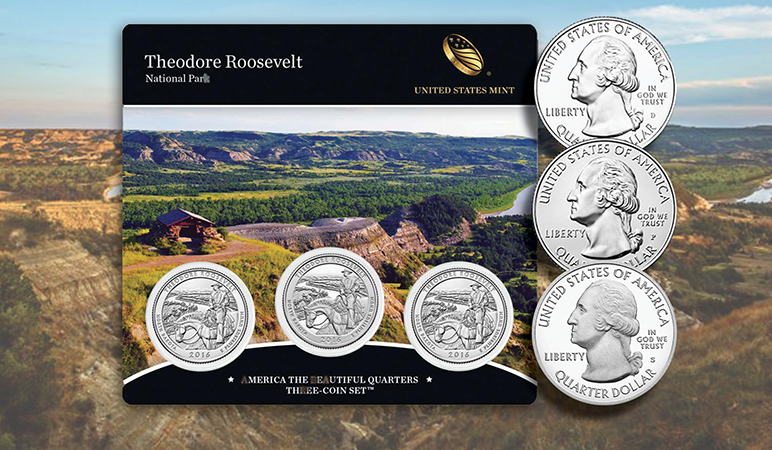 At noon today, the U.S. Mint will be accepting orders for the 2016 America the Beautiful three-coin set featuring the Theodore Roosevelt National Park. Each set will contain one Uncirculated coin from the Denver Mint and one from the Philadelphia Mint, one Proof from the San Francisco Mint, and a certificate of authenticity. The sets are priced at $9.95, with no household order limit.

The quarter honoring the Theodore Roosevelt National Park in North Dakota is the 34th coin in the America the Beautiful Quarters® Program. The reverse design depicts Roosevelt on horseback overlooking the Little Missouri River.

Young Roosevelt, photographed in the Little Missouri Badlands ca. 1883. (Photo courtesy of Harvard College Library) On the ATB quarter he is shown in similar attire, overlooking the Little Missouri River, although he appears to be a bit older than in his ranching days.

The genesis of the Theodore Roosevelt National Park can be found in the 1880s, when the young politician went on a buffalo-hunting trip in the Badlands, Dakota Territory. The New Yorker in his fringed buckskin outfit was a source of amusement to the locals, but he proved to be mentally and physically tougher than his get-up suggested. He ultimately purchased two properties in the area, operating them as cattle ranches. Of the second ranch, Elkhorn, he would later write,

My home ranch-house stands on the river brink. From the low, long veranda, shaded by leafy cotton-woods, one looks across sand bars and shallows to a strip of meadowland, behind which rises a line of sheer cliffs and grassy plateaus. This veranda is a pleasant place in the summer evenings when a cool breeze stirs along the river and blows in the faces of the tired men, who loll back in their rocking-chairs (what true American does not enjoy a rocking-chair?), book in hand—though they do not often read the books, but rock gently to and fro, gazing sleepily out at the weird-looking buttes opposite, until their sharp outlines grow indistinct and purple in the after-glow of the sunset.

—from Hunting Trips of a Ranchman

His experiences in the West, particularly in his ranching endeavors, led him to become one of the country’s early conservationists. After his death in 1919, his ranches and the surrounding area began a decades-long journey that would end in their designation as the Theodore Roosevelt National Park. Shown on the packaging of the ATB quarter trio is the park’s River Bend Overlook, which was constructed by the Civilian Conservation Corps in the 1930s. It is said to be one of North Dakota’s most frequently photographed sites.