The stated primary mission of the United States Mint is to manufacture and distribute circulating coins, precious metals, collectible coins, and national medals to meet the needs of the United States. The Mint must carry out this mission in adherence with the laws established by Congress and the requirements set forth under the authority of the Secretary of the Treasury. In recent years, the various laws and requirements, the rising cost of base metals, and shifts in demand from circulation have left five out of six circulating denominations in an unusual state.

The cent and nickel each cost more than their face value to produce and distribute. The quarter dollar is in the midst of a lengthy circulating commemorative program, although unfortunately the coins are nowhere to be found within circulation. The half dollar continues to be minted but is not issued for circulation. The $1 coins are issued in five different designs, while at the same time paper $1 bills are issued for the same denomination. After recent developments at least four of the $1 coin designs will no longer be issued for circulation.

This article will examine the legal requirements, specifications, cost to manufacture, senigiorage generation, and production for each of the circulating coin denominations. 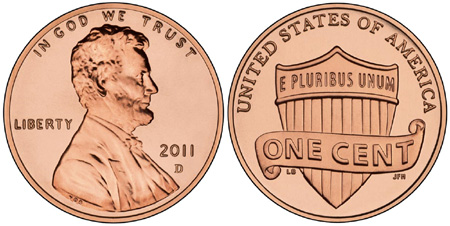 The one cent coin currently features a portrait of Abraham Lincoln on the obverse and the Union Shield on the reverse. By law, the coins are required to have a diameter of 0.75 inch and a composition of copper and zinc. Currently, the coin are struck in copper plated zinc with a net composition of 97.5% zinc and 2.5% copper. The current value of the metal included is is 0.4956 cents. (All metal values from Coinflation.)

For the current year through November 30, 2011, the US Mint has struck 4.63 billion cents for circulation. This exceeds the prior year total of 4.01 billion. 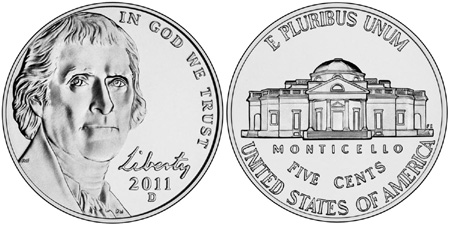 The five cent coin, or nickel, currently features a portrait of Thomas Jefferson on the obverse and his Monticello home on the reverse. By law, the coins are required to have a diameter of 0.835 inch and weight of 5 grams. The composition is required to be an alloy of 75% copper and 25% nickel. The current metal value included in each coin is 4.93 cents. There have been lengthy periods of time when the metal value of the nickel has exceeded its face value.

Based on the figures from the US Mint’s latest annual report, it cost 9.22 cents to produce and distribute each nickel. The cost has exceeded the face value from 2006 to 2010, generating a loss of $115.3 million.

The ten cent coin or dime features a portrait of Franklin D. Roosevelt on the obverse and a torch with sprigs of olive and oak to each side on the reverse. By law, the coins are required to have a diameter of 0.705 inch and weight of 2.268 grams. These coins are smaller and lighter than the lower denomination nickel since before 1965, the dime was struck in 90% silver. Currently, the composition consists of two identical outer layers that are an alloy of 75% copper and 25% nickel with an inner core of copper. The net composition is 91.67% copper and 8.33% nickel.

Based on the US Mint’s most recent annual report, it cost 4.56 cents to produce and distribute each dime. The production of dimes for the most recent fiscal year generated seigniorage of $60.5 million.

For the current year through November 30, 2011 the US Mint’s production of dimes for circulation has reached 1.43 billion. This already exceeds the prior year’s annual production of 1.1 billion.

The twenty five cent coin or quarter dollar features a portrait of George Washington on the obverse and five different reverse designs per year representing national parks or sites. The rotating reverse designs are issued as part of the America the Beautiful Quarters Program, which is scheduled to run from 2010 to 2020. Although these are intended to be circulating commemorative coins, obtaining the coins through the channels of circulation has been difficult due to minimal production levels.

When the program was conceived, the US Mint had just completed the hugely successful 50 State Quarters Program. At least part of the impetus for creating the new program was the potential to earn increased seigniorage from another lengthy program. So far, ten different designs have been dutifully issued under the program, however the mintages have been at a fraction of the levels of the previous State Quarters.

The quarter dollar has a diameter of 0.955 inch under law and a weight of 5.67 grams. The composition consists of two outer layers of 75% copper and 25% nickel with an inner core of copper. The overall composition is 91.67% copper and 8.33% nickel. The metal value of the quarter is 4.57 cents, and the US Mint’s cost to produce and distribute the quarter based on the most recent annual report is 9.56 cents each. 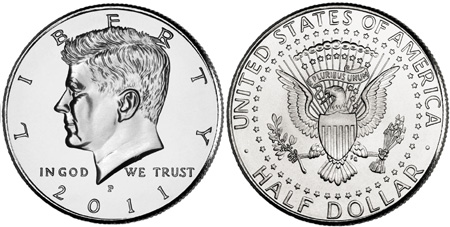 The half dollar features a portrait of John F. Kennedy on the obverse and the Presidential Seal on the reverse. By law, the coins have  diameter of 1.205 inches and weight of 11.34 grams. The composition is the same as the dime and quarter, with outer layers of 75% copper and 25% nickel over a core of pure copper. The net composition is 91.67% copper and 8.33% nickel. The metal value of the half dollar is 9.14 cents.

The United States Mint does not provide the cost to produce and distribute the half dollar. Since 2002, the coins have not been distributed through circulation channels, but rather only the minimal number of coins necessary to meet demand from collectors hasbeen produced.

During the 2010 calendar year, there were 3.5 million circulation strike half dollars produced. For the current year to date, production is indicated as 3.45 million. These coins are sold to collectors at a premium to face value. The numismatic revenue earned from the sale of half dollars to collectors is not broken out by the United States Mint. Currently, the US Mint sells two roll sets containing $20 face value in coins for $34.95 or 200-coin bags containing $100 face value in coins for $134.95.

The $1 coins are currently produced under two separate programs, yielding five different designs per year. The Presidential Dollar Program features the portraits former Presidents on the obverse with an image of the Statue of Liberty on the reverse of each coin. Four different coins are released each year. The Native American Dollar Program features a portrait of Sacagawea and child on the obverse and an annually rotating reverse design representing the contributions and accomplishments of Native Americans.

By law, the Presidential Dollar Program is required to continue at a rate of four different designs per year until all former Presidents who have been deceased for at least two years have been honored. Recently, the Treasury Department has indicated that production of the series for circulation will be suspended, and the coins will only be produced in the limited number needed to fulfill demand from collectors.

Both series of dollar coins are required to have a diameter of 1.043 inches, a golden color, distinctive edge, and tactile and visual features that make the coins readily discernible. Currently, the coins have an outer layer consisting of 77% copper, 12% zinc, 7% manganese, and 4% nickel, bonded to a core of pure copper. The net composition is 88.5% copper, 6% zinc, 3.5% manganese, and 2% nickel. The metal value of the coin is 5.61 cents.