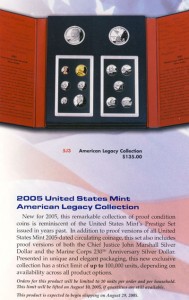 In 2005, the United States Mint revived the concept of offering a specially packaged numismatic product which combined the coins from the annual proof set with one or more of the year’s commemoratives. The previous offering had been referred to as the Prestige Proof Set and had been issued from 1983 to 1997. The new offering was called the American Legacy Collection and would only be offered for four years from 2005 to 2008 before the product was discontinued.

Within initial promotional literature, the US Mint announced the upcoming American Legacy Collection as “reminiscent of the United States Mint’s Prestige Set issued in year’s past” with a limit of “up to 100,000 units.” The product would contain proof versions of all of the 2005-dated circulating coinage, which included the Lincoln Cent, two Westward Journey Jefferson Nickels, Roosevelt Dime, Kennedy Half Dollar, Sacagawea Dollar, and five State Quarters. The product would also contain proof versions of the 2005 John Marshall Silver Dollar and 2005 Marine Corps Silver Dollar.

The coins were packaged within a large fold out case that could be arranged to stand upright for display. The size of the packaging was rather large for the number of coins contained. With the display closed for storage, it measured 10.5 inches by 9.5 inches by 1.5 inches, or about the size of a text book. 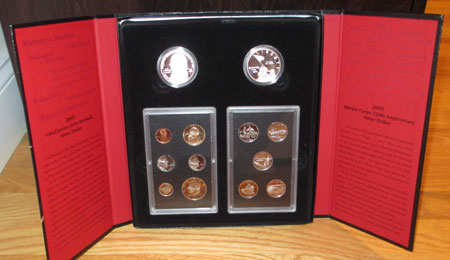 The 2005 American Legacy Collection was priced at $135 per set. This cost was higher than the prices for the separate annual proof set ($22.95) and the cost of the two proof silver dollars ($39.00 each at regular pricing or $35.00 each during the introductory period). The product limit was 50,000 units and final sales were recorded for 49,000 sets.

The following year, the set was offered once again, containing the nine coins from the annul proof set, as well as the proof versions of the 2006 Benjamin Franklin Silver Dollar (Scientist) and the 2006 Old San Francisco Mint Silver Dollar. A full sell out was achieved for the product limit of 50,000 units.

The 2007 American Legacy Collection saw an expansion in size due to the greater number of coins included in the annual proof set. The proof versions of circulating coins now consisted of the cent, nickel, dime, five quarters, half dollar, Sacagawea Dollar, and four Presidential Dollars. The two commemorative coins included for this year were the 2007 Little Rock Central High School Desegregation Silver Dollar and the 2007 Jamestown 400th Anniversary Silver Dollar. Despite the extra coins, the set remained at the same price level of $135.

The expanded number of coins made the physical size of the set even larger. When closed for storage, the dimensions were now 12.5 inches by 9.5 inches by 1.5 inches. Sales fared more poorly this year, reaching 27,023 out of the maximum of 50,000 units.

Representing the final release for this product type, the 2008 American Legacy Set was available for sale for the brief period from October 27, 2008 until December 12, 2008, which was the cut off date for sales of the commemorative coin included. Each set contained proof versions of the 2008-dated circulating coins, along with the proof version of the 2008 Bald Eagle Silver Dollar. Since only one commemorative coin was included, the price for the collection was reduced to $100. This still represented a cost that was $29.10 higher than purchasing the annual proof set and individual commemorative coin.

Sales for this final set ended at their lowest level for the product type at 21,194 out of the maximum of 50,000 units.