2 gourdes: The 2 gourdes is generally considered to be the most common Haiti Tyvek note, and makes for a good introduction to the series.

More and more countries all over the world are in the process of switching or have already switched their circulating currency to issues printed on plastic (polymer) materials. Polymer banknotes are much more durable than traditional paper banknotes, have better security features, and are cheaper in the long run. Examples of countries that have switched part or all of their currency to polymer banknotes are Australia, Brunei, Canada, the United Kingdom, and Vietnam, among others. These relatively modern banknotes have become a very popular field with collectors from around the world. For such collectors, the earliest issues to collect are a series of banknotes from Haiti and a note from Costa Rica, both printed on Tyvek. A trademark of the DuPont company, Tyvek is a composed of flash-spun polyethylene fiber. A single note from the Isle of Man was printed on Bradvek, which is the same material, but was marketed under that name by the printer Bradbury & Wilkinson and Co. In this article we will take a look at the Haiti banknotes, a series that includes some tremendous modern rarities.

Paper money printed on Tyvek was the first semi-successful attempt at creating more durable “plastic” banknotes. Tyvek has a variety of uses, mostly for protection. One common use is in envelopes from both the United States Postal Service and FedEx, which are provided to customers for mailing items; it has also been used in the clothing industry as well as construction. Tyvek is tear-resistant, lightweight, and durable, and has been produced since the 1960s. Its use for banknotes was a novel experiment that could have worked out well, except for the fact that the hot and humid climate of Haiti (and Costa Rica) caused the ink to smear. After some time in circulation, many of the notes were difficult to recognize, so after a relatively short trial the Tyvek banknotes were taken out of circulation.

Six denominations were printed on Tyvek for Haiti. All are dated Law of 1979 on the notes, but were introduced into circulation around 1982–1983. The designs were identical to those on regular paper issues from the time period, although there are minute differences on some of them. The following notes were issued:

As you can see, a sizeable number of notes were printed on Tyvek, and the notes were quite commonplace in general circulation. The 50 gourdes (which comes in two different signature/watermark varieties) was the first to be introduced into circulation, while the other denominations followed shortly thereafter. Paper versions of the same design circulated alongside the Tyvek notes for the four lowest denominations, but it can be presumed that whenever they were withdrawn the Tyvek issues were set aside to see how they had held up in circulation.

The Tyvek series was printed by the American Banknote Company (commonly abbreviated as ABNC) in New York, the famous printing company that had printed banknotes for Haiti for many years. Even though the designs were identical to those of earlier issues, new printing plates were made for each of the denominations, with minute differences. The printing plate of the Tyvek 100 gourdes, for example, was just a hair bigger than the printing plate for the paper 100 gourdes already in circulation, although the difference can been seen only when the two notes are compared side by side. Tyvek notes are generally pretty easy to identify, as the paper is noticeably different. They also have unique prefixes in the serial number, and, unlike the paper issues, they do not have colored planchettes (small dots) added to the paper.

Even though the entire series of banknotes from Haiti makes for an interesting study (and rarities, as even notes from the 1960s and 1970s are often very difficult to find in any grade) it is the Tyvek series that is the most popular with collectors. As they’re the first banknotes in a medium that sees more and more use in recent years (even though in slightly different substrates), collectors have started to take notice, and values for Uncirculated pieces have started to increase rapidly. From personal experience, the rarity of the series goes up with each denomination, except that the 2 gourdes is a little more readily available than the 1 gourde. The 50 and 100 gourdes are very scarce but appear on the market multiple times each year, while both the 250 gourdes and 500 gourdes are major rarities that are very rarely offered for sale. The last Uncirculated examples of the two highest denominations to appear at public auction were sold in 2009, when the 250 gourdes brought $3,900, while the 500 gourdes brought $4,887.50. It is believed that if such a pair were offered at auction today, these two notes combined could easily bring five figures. 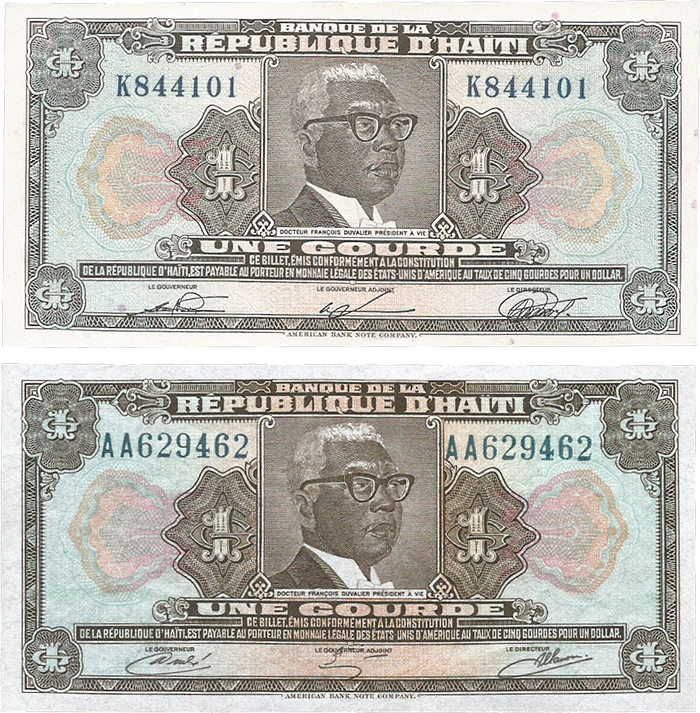 1 gourde comparison: Both of the L. 1979 issue, the top note is printed on paper, while the bottom is printed on Tyvek. Note the security planchettes in the paper note and the prefix on the Tyvek note.

50 gourdes: The 50 gourdes was the first of the series to be introduced in circulation. This is the type with watermark, later printings do not have a watermark.

For collectors wishing to add some Tyvek notes from Haiti to their collections, the two lowest denominations are not only easier to find, they are also a lot more affordable, even though the low values in the Pick catalog are of no use. For the 1 gourde in Gem Uncirculated condition, a collector should expect to pay $100–$125, while a 2 gourdes in the same condition brings about $80–$100 at the time of writing (April 2017). The 50 gourdes is a lot scarcer and sells for about $600–$800, while the 100 gourdes is easily a $1,000+ banknote in Gem Uncirculated condition and is very difficult to find. Specimens and Proofs of all denominations are sometimes seen but are quite scarce; but for the 250 gourdes and 500 gourdes they are generally all that is available to collectors. Because of this they sell readily for around $1,000. The 2 gourdes also exists with a red overprint that crossed out the portrait of Duvalier and “7 Fev. 1986” (the date of the Haitian revolution that led to the overthrow of Duvalier’s son, Jean-Claude Duvalier). The origin of these is unclear, and they are generally considered private fabrications made after the Tyvek pieces circulated.

Circulated 100 gourdes: This Tyvek 100 gourdes is in VF condition. Grades such as these are seldom seen on any of the Haiti Tyvek notes.

One final note to make is that the Tyvek series is very seldom encountered in circulated grades. Because Haiti was never a popular tourist destination after François Duvalier came to power in the late 1950s, very few circulated pieces were taken out of the country, and most ended up back at banks where they were withdrawn (uncirculated pieces were purchased by dealers from local contacts in the early 1980s, and provide much of what is available for collectors today). Even though prices do not reflect this, finding a circulated example of any denomination is very difficult, and they are interesting survivors of a short-lived experiment that laid the foundations for polymer banknotes.   ❑

The modern bird banknote series of the Netherlands Antilles, 1986 to present

Bank notes of the Cayman Islands

Greece: Famed artist is featured on first Greek collector coin to include colour