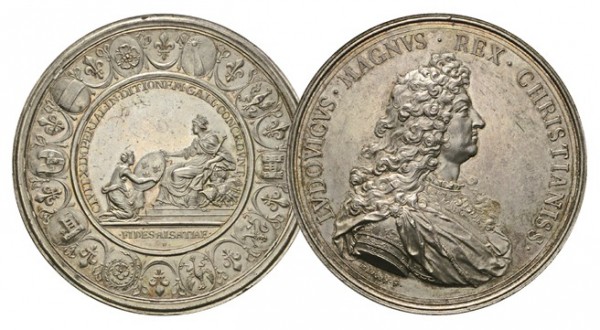 The Museum of Stamps and Coins (Musée des Timbres et des Monnaies) in Monte Carlo has announced that they will host a November exhibition featuring coins and medals issued during the reign of Louis XIV (1643-1715) of France, a rich and eventful time for Monegasque history. “The Sun King and Princes of Monaco Exhibition” will also include various medals and coinage that circulated in the small principality of Monaco.

2015 marks the 300th anniversary of the death of King Louis, referred to as the “Sun King.” He is also remembered in Europe for his reign of 72 years and 110 days, the longest of any monarch of a major country in European history.

The history and intrigues involving France and Monaco have spanned centuries, especially between sovereigns of the two entities. The French King was Godfather of the future Prince Louis I of Monaco, who was prince at a time when their two countries enjoyed a privileged alliance, following the Treaty of Péronne in 1641.

Marriages of future princes of Monaco with French senior princesses served to increase their titles and decorations. The presence of the Monegasque princes at the Court of France, together with their ability to move freely within the kingdom, increased their influence and responsibility to the French Crown; this included heading the French Embassy in Rome, which was entrusted to the Prince of Monaco.

Louis XIV, the Sun King of France, did more than create Versailles and elevate the arts and letters to their highest level in Europe. For Monaco, Louis XIV remains the French head of state who fostered the principality by according it a privileged alliance between the two states in 1641 by enacting the treaty of Peronne. Under the reign of Louis XIV, and with his constant support, the reigns of Princes Honoré II, Louis I, and Antoine I encouraged tremendous growth to Monaco and the entire southern region of France.

A sincere and loyal friend of the principality, Louis XIV showered the princes and the principality with his attentions and favors. He organized high-ranking weddings, conferred prestigious titles and high military ranks, made the Prince of Monaco ambassadors to the Pope, and won the respect of his contemporaries by enacting the French/Monegasque Treaty of Péronne. Above all, Louis XIV conceived with Antoine I an estate solution that would allow for a matrimonial alliance in 1715 between the Grimaldis and Matignons, thus ensuring the sustainability of the dynasty together with all their possessions.

The exhibition will place several rare and historical items on display, with 72 years of history recounted in a set of unique documents preserved in the archives of the Prince’s palace. Also included will be exceptional coins and medals belonging to the National Library of France, the Museum of Art History of Vienna (Austria), the Cabinets of Medals of Marseille and Lyon, and private collectors, highlighting a great near-century that was as important to Monaco as it was to France. Many of these rare coins and archival documents are infrequently seen or exhibited.

The exhibition will display for the first time several sets of rare coins of Dauphiné, Béarn, and Flanders, illustrating the history of Franco-Monegasque relations at the time. The display traces the strong ties that united Princes Honoré II, Louis I, and Antoine I to Louis XIV for the duration of his reign.

The exhibition will be held in conjunction with the Monte Carlo Auction and Numismatic show organized by Editions Gadoury, from the 14th to the 15th of November, 2015. The Musée des Timbres et des Monnaies is located at Terrasses de Fontvieille, Monte Carlo. The bourse opens on the November 15.  For additional information about the exhibition and the popular coin show, please visit the Web site of Editions Gadoury.