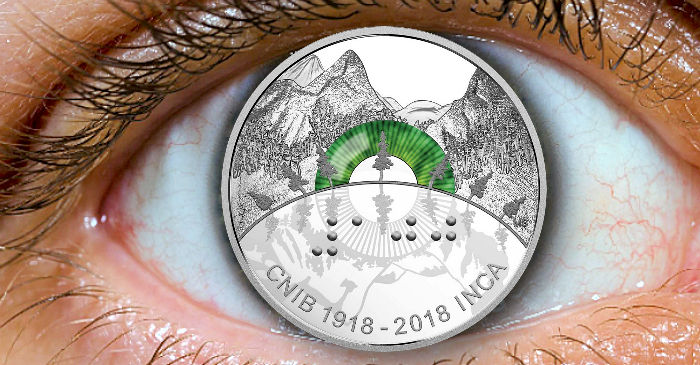 (Ottawa, Ontario) March 21, 2018 — Working with a partially sighted artist and adding braille to a coin for the first time, the Royal Canadian Mint is proud to launch a finely crafted and innovative silver coin and bronze medallion set honouring the 100th anniversary of the Canadian National Institute for the Blind (CNIB). This limited-edition collector set celebrating a century of providing invaluable assistance to generations of blind and partially sighted Canadians can be ordered as of March 21.

“The Mint is delighted to have produced an exceptional coin and medallion set which recognizes the incredible difference the CNIB has made in the lives of blind and partially sighted Canadians over the last 100 years,” said Sandra Hanington, president and CEO of the Royal Canadian Mint. “This coin and medallion set is a beautiful work of art which celebrates the strength and resilience of extraordinary Canadians who inspire us all.”

“We are honoured the Royal Canadian Mint has chosen to tell CNIB’s story of a century of dedication to people who are blind and partially sighted,” said John M. Rafferty, president and CEO, CNIB. “We’re delighted to have a memento as enduring and symbolic as a commemorative coin set to mark this important milestone in CNIB’s history.”

The coin and medallion set was designed by Canadian artist Meghan Sims of Kitchener, Ontario. Born with a rare visual condition called Achromatopsia, she is fully colour blind. Her unique visual perception of the world around her has shaped and become characteristic of her artistic style. 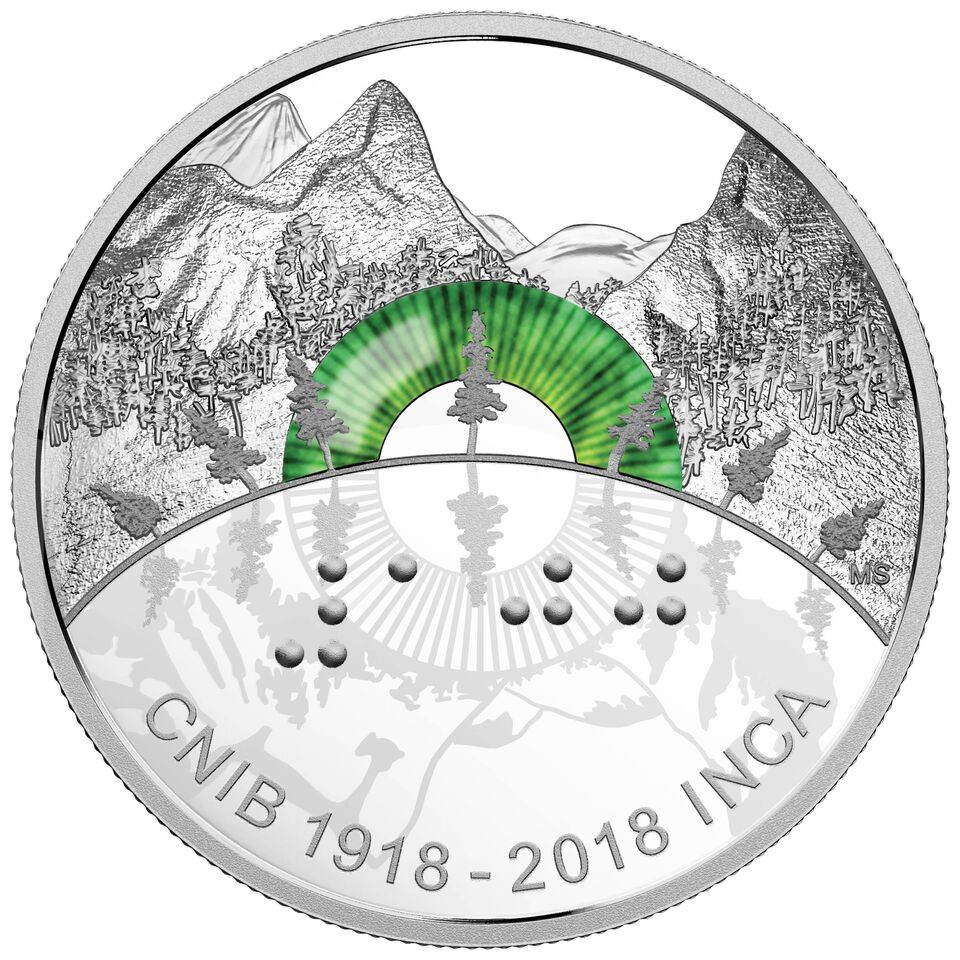 Since mint collectibles are normally encapsulated to maintain their pristine condition, a medallion is included in this anniversary set, intentionally presented without a capsule, so that the braille engraving of the legend “CNIB-100-INCA,” as well the entire relief of its design, can be experienced through touch alone. In providing a unique tactile experience, the medallion captures many of the design elements found on the reverse (or tails side) of the silver coin. These include the number “100” engraved in braille; an abstract eye over a mountain scene to represent the foundation of the CNIB; and a curved horizon evoking an eyelid, along which seven jack pines honour each of the CNIB’s founding members. The jack pine was chosen as a symbol of the strength and resilience of people living with sight loss. 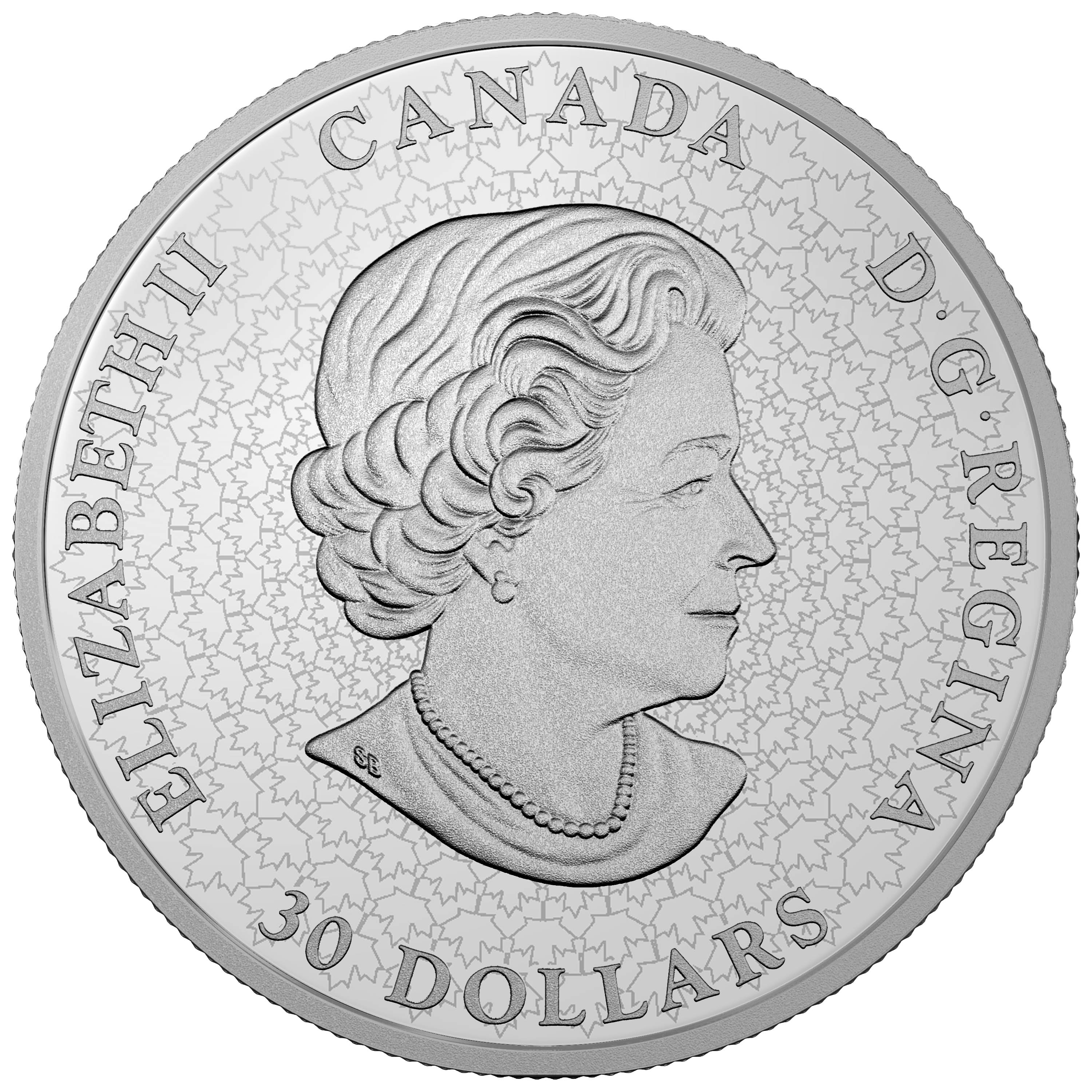 The 2018 $30 Fine Silver Coin And Bronze Medallion Set — 100th Anniversary of the Canadian National Institute for the Blind has a limited mintage of 3,000 and retails for $219.95. It is available for purchase by contacting the mint at 1-800-267-1871 in Canada, 1-800-268-6468 in the U.S., or online. The set is also available at the Royal Canadian Mint’s boutiques in Ottawa and Winnipeg, as well as through the mint’s global network of dealers and distributors, including participating Canada Post outlets.


About the Royal Canadian Mint

The Royal Canadian Mint is the Crown corporation responsible for the minting and distribution of Canada’s circulation coins. An ISO 9001-2008 certified company, the mint offers a wide range of specialized, high-quality coinage products and related services on an international scale. For more information on the mint, its products, and services, visit its website.