New Zealand Post – in partnership with the Reserve Bank of New Zealand have launched (April 2013) a new collector coin marking the 60th anniversary of the coronation of Queen Elizabeth II which occurred on the 2nd June 1953. HRH Princess Elizabeth, the Duchess of Edinburgh succeeded to the British throne on the 6th February 1952 at the age of 25 after the unexpected death of her father King George VI. Sixteen months later, a lavish coronation which brought together many heads of state, government and leaders in the commonwealth to Westminster Abbey to crown the new sovereign in a centuries old tradition including anointing and an oath of allegiance by the Queen. Elizabeth II celebrated her Diamond Jubilee in 2012, only the second British monarch to mark this milestone anniversary. 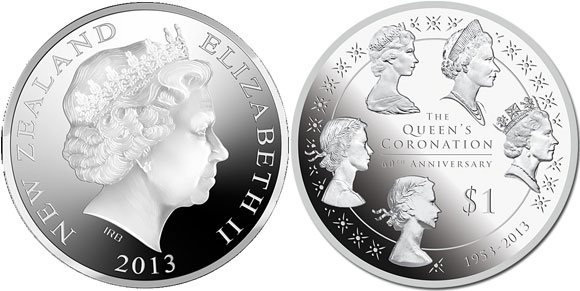 Struck by the Mayer’s Mint in Germany, the coin’s reverse design includes all of the official portraits which were depicted on New Zealand coinage since the Queen’s accession. The five portraits are arranged in a circle along with traditional Maori patterns between portraits. Text reading “THE QUEEN’S CORONATION 60TH ANNIVERSARY” is placed in the coin’s centre in four lines. The denomination of $1 and the memorial year 1953 – 2013 are seen just to the lower left. The obverse portrait of the Queen is the work of Ian Rank-Broadley, in use on New Zealand coinage since 1999. Orders are being received now for delivery in mid-June.

For more information on this coin and others issued by the Reserve Bank of New Zealand, please visit the website of New Zealand post at: http://coins.nzpost.co.nz/2013/queens-coronation-60th-anniversary-silver-proof-coin Information offered in English – international orders fulfilled.