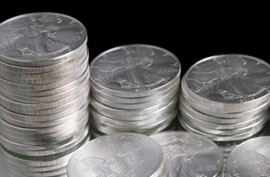 The monthly COMEX silver options expired on Tuesday this week.  For several years, there has been a suspiciously consistent trend that the prices of gold and silver get clobbered coming up to and going into the close of the COMEX on the days of the COMEX and the Over The Counter (OTC) options expiration.

If call options contracts are exercised, the contract owner needs to pay for the contract in full (COMEX options are for 100 ounces of gold or 5,000 ounces of silver) and take physical custody of the metal.  Exercising COMEX call options would squeeze COMEX inventories, which could spur other investors to start taking delivery of contracts instead of rolling them over into future months.  Such a run would be certain to push up precious metals prices quickly.

Because the price suppression on the day of options expiration has been so predictable, I have taken to ordering silver gift products for holiday shoppers on such days for the past three years.  Invariably, that ended up saving about $2.00 per ounce versus buying the items closer to the end of the year.  I had a holiday silver gift order ready to place this past Tuesday in the 1:30-2:00 PM range.

As expected, the price of silver started to drop late last week, closing below $18.00 on Friday. In late European markets Tuesday, silver was trading in the $17.70’s.  Up to that point, the silver market was running true to pattern.

What happened to create such a large increase and to have it happen exactly when it did?

The only people who might know are those involved in placing the large buy orders, and they aren’t talking.

Two things that can be said for certain are that in early US markets, there were two reports released that rattled markets around the world.  There was the report that US July purchases of existing homes had fallen 27% to their lowest level in at least 15 years!  At almost the same time, Goldman Sachs issued its analysis warning that the quantitative easing (i.e. increasing the money supply) that the US government has been doing would wreak havoc on the US economy in the near future.

At first, some analysts were suspicious that JPMorgan, the bank widely considered to hold the largest short position in the COMEX silver market, had received advance notice of these two reports and were aggressively buying back their short positions.  However, the daily COMEX reports did not show changes in open contracts to support that thesis.

Now, silver guru David Morgan and at least one other precious metals analyst have stated that they think that a huge deep-pockets buyer of gold and silver (which may be different entities for each market) has judged that they can put the squeeze on the limited inventories in COMEX and in London Bullion Market Association warehouses available to cover existing contracts.  By deep pockets, they mean a party or a consortium that can tap into billions of dollars for this buying spree.  It is entirely possible that one or more central banks may be party to this week’s moves.  Apparently, the order has gone out to just buy gold and buy silver, no matter what the price.

If this is what is happening, it is reminiscent of the 1992 move by George Soros, Jim Rogers, and other investors to short the British pound.  At one point, 100% of the assets of the Quantum Fund were invested in shorting the pound.  Huge profits were realized when this strategy “broke the Bank of England.”  It is entirely possible that this same scenario is now playing out in the gold and silver markets.  While I cannot confirm that there is financially strong single buyer in the gold and silver markets right now, it is a definite possibility.  It happened in the British pound market 18 years ago, and it could happen again.

This year, my strategy to buy silver holiday gifts at a lower price didn’t work out as planned.  If you are planning to add to your gold and silver positions “before prices take off,” you may not want to wait any longer.