Fort Roughs, Sealand. It was announced with great sadness by the Princely Family of Sealand the passing of HRH Prince Roy, Sovereign Prince of Sealand on the 9th October at the age of 91 years. Prince Roy, founder of the micro-princely state of Sealand which lies just 6 miles off the southeast coast of the UK was born Paddy Roy Bates in 1921 in the United Kingdom and came to world-wide prominence when in 1967, the former British Army Major and adventurer claimed as his own territory, a dis-used platform defense tower in International waters off the coast of Southern England. The platform was declared sovereign territory and Roy proclaimed himself and his wife, Joan Bates as joint sovereign rulers on the 2nd September – his wife’s birthday.

The move was originally made with the intention of setting up an independent radio station at the site. Bates was described at the time as displaying the epitome of initiative, daring and boldness which made the British Empire the envy of the world. While the move was seen at the time as a publicity stunt and not taken seriously, the principality of Sealand has since flourished for more than 45 years and even gained a certain degree of international recognition when in 1977, a German diplomat was dispatched to Sealand to negotiate the release of one of its nationals who attempted to seize Sealand and claim the territory for himself before initially being captured and imprisoned on the tower. 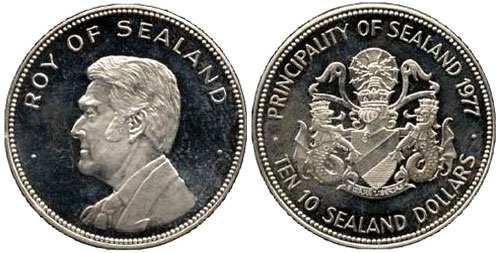 Prince Roy and his consort Princess Joan have issued stamps, coins (the coin illustrated was a $10 silver example issued on the 10th anniversary of independence in 1977) and the authorized coins of Sealand are both popular and highly sought after. In 1975, Prince Roy & Princess Joan granted a constitution which established Sealand as an independent hereditary state, often referred to as the World’s smallest nation.  The micro-nation once issued their own passports, there is a national anthem and the principality participates in sports events with the sponsorship of national teams for football and roller-derby.

Sovereign Prince Roy retired from day to day administration of the state and handed over its responsibilities to his son, elevating him to the rank of Prince-Regent in 1999. The late Sovereign Prince is succeeded by the Princely Couple’s only Son, the Prince-Regent Michael – now Michael, Sovereign Prince of Sealand and is survived by his wife, Princess Joan, their only daughter Penelope and several Grandchildren including the principality’s new heir apparent, Crown Prince James.

I myself had the pleasure of meeting Prince Roy and Princess Joan during a photography session and hearing about some of these adventures from Roy himself. He led a truly amazing life from humble beginnings to world-wide notoriety. His escapades could have been narrated right out a spy novel or action-adventure movie. He once said in an interview, “I might die young or I might die old, but I will never die of boredom.” More factual words have never been spoken… Sealand could have had no greater leader and founder than Prince Roy and Princess Joan. He will be well remembered and missed by his admirers.

For more information on the Principality of Sealand, please visit their website at: http://www.sealandgov.org/