The latest release within the Perth Mint’s “Famous Ships that Never Sailed” coin series features the Nautilus. This fictional submarine was captained by Nemo in Jules Verne’s famous science fiction novels Twenty Thousand Leagues Under the Sea and The Mysterious Island.

This represents the sixth release in the series which has also featured the Flying Dutchman, Pequod, The Demeter, The Jolly Roger, and The Gloria Scott. Forthcoming releases will feature The Chimera, Hispaniola, and Ghost. 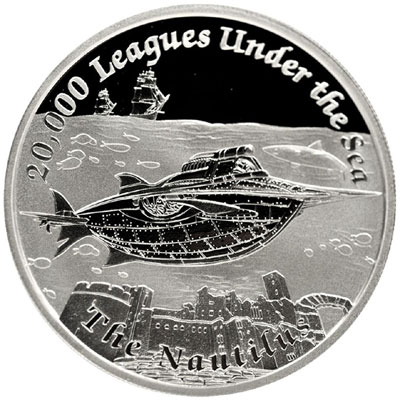 The reverse design for the latest coin features a representation of the Nautilus gliding underwater with some ancient ruins seen below. On the surface of the water two ships are seen. The inscriptions include “20,000 Leagues Under the Sea” and “The Nautilus”.

The obverse of the coin features the Ian Rank-Broadley effigy of Queen Elizabeth II with inscriptions indicating the “2015” date and the monetary denomination. The coins are issued as legal tender under the authority of the government of Tuvalu.

Each coin is struck in 1 troy ounce of 99.9% pure silver to proof quality with a diameter of 40.60 mm. The coins are presented in a wooden display case in the shape of a book and accompanied by a numbered Certificate of Authenticity. No more than 3,000 of the Famous Ships That Never Sailed – Nautilus 2015 1oz Silver Proof Coins will be released.