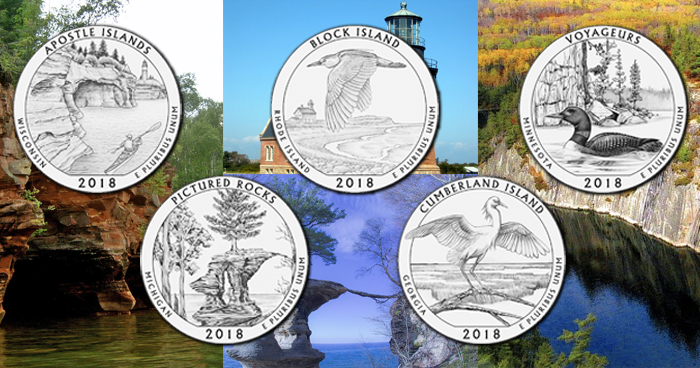 The U.S. Mint unveiled the reverse designs for the 2018 America the Beautiful quarters on August 1 at the American Numismatics Association’s World’s Fair of Money in Denver.

The national sites to be recognized in 2018 are Pictured Rocks National Lakeshore in Michigan, Apostle Islands National Lakeshore in Wisconsin, Voyageurs National Park in Minnesota, Cumberland Island National Seashore in Georgia, and Block Island National Wildlife Refuge in Rhode Island. Each quarter reverse in the series depicts a scenic representation of the park or historic site at the center, framed by a plain, raised, circular border on which the park name (or an abbreviated version of it) appears at the top, the state name and E PLURIBUS UNUM at lower left and lower right, respectively, and the date of issue below.

The design representing Apostle Islands National Lakeshore depicts the sea caves at Devils Island with the lighthouse in the background and a kayaker paddling in the foreground. The reverse is the work of AIP designer Richard Masters and Mint sculptor-engraver Renata Gordon. (Scenic photo by Tim Wilson)

The design representing Voyageurs National Park depicts a common loon swimming to the left with a rock cliff in the background. This reverse was created by AIP designer Patricia Lucas-Morris and Mint sculptor-engraver Joseph Menna. (Scenic photo by jck_photos; inset by Aaron Warren)

Cumberland Island National Seashore’s design depicts a snowy egret perched on a branch on the edge of a salt marsh, its wings raised in preparation for flight. The reverse was designed by AIP designer Donna Weaver and sculpted by Mint sculptor-engraver Don Everhart (who recently retired from the Mint). (Scenic photo by Trish Hartman; inset photo courtesy of Pixabay)

And finally, the design selected for the quarter honoring Block Island National Wildlife Refuge depicts a black-crowned night-heron flying to the left over a view from the beach at Cow Cove looking toward Sandy Point. The North Lighthouse is seen in the background. This reverse is the work of AIP designer Chris Costello and Mint sculptor-engraver Phebe Hemphill.(Scenic photo by David Wilson)

The obverse of the 2018 quarters will continue to feature the 1932 portrait of George Washington by sculptor John Flanagan. Required obverse inscriptions are UNITED STATES OF AMERICA, LIBERTY, IN GOD WE TRUST, and QUARTER DOLLAR.


2018 marks the ninth year of the America the Beautiful Quarters Program, which was authorized by Public Law 110-456, the America’s Beautiful National Parks Quarter Dollar Coin Act of 2008. The act directs the Mint to design, mint, and issue quarter-dollar coins emblematic of a national park or other national sites in each state, the District of Columbia, and the five U.S. territories. In accordance with the act, the Mint issues the new quarters at the rate of five per year through 2020 in the order in which each honored site was first established. The final coin will be released in 2021.