The first coin was issued within the Thomas Jefferson Coinage and Currency Set, which was announced as a way to pay tribute to Jefferson’s legacy as the father of America’s decimal coinage and for his role in the creation of the United States Mint. Each set contained an uncirculated version of the 1993-dated Thomas Jefferson Silver Dollar, an uncirculated 1994 Jefferson Nickel, and a 1976 $2 Federal Reserve Note. The sets were priced at $34 for orders placed during a pre-issue period and $39 for orders placed after the cut off date. 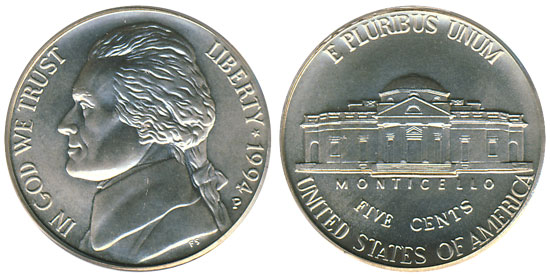 Initially, collectors were unaware that the uncirculated 1994 Jefferson Nickel would have a different finish than the regular business strike. After collectors quickly began to note the difference, the United States Mint confirmed that a special finish had been used in order to match the commemorative silver dollar. The finish was created by sandblasting the dies and striking the coins twice to result in what was called a “matte finish” or “matte proof”.

For this product, the US Mint announced a limited edition of only 25,000 sets. Anticipating a prompt sell out, special ordering procedures were followed. Orders would only accepted by mail with a post mark no earlier than February 21, 1997. Orders would be sorted based on the date and time the order was received. A decision would be made as to whether an ordering limit would be imposed. Then, orders would be processed up to the accepted limit in the sequence received.

Within the first week, a sell out was announced with an ordering limit of five sets per household established. The US Mint reported that the average number of sets fulfilled per order would be 1.93, indicating that many customers ordered less than the five set per household maximum.