The Treasury of the Government of Alderney have issued a new four-coin set which not only pays tribute to a great World War II leader, but also to his genius as a gifted orator, leader, statesman and artist – Sir Winston Churchill was very much a renaissance man and could lend his talents to just about any subject. The year 2015 is remembered in his honor as it is the 50th anniversary of his passing and this four coin set highlights the many facets of one of Great Britain’s most admired personalities. A young Winston Churchill while stationed in India in 1897 once wrote that: “Of all the talents bestowed upon men, none is so precious as the gift of oratory.” Often quoted, always inspiring, Churchill’s words have become legend, and they tell his story decades later, in his own inimitable fashion. 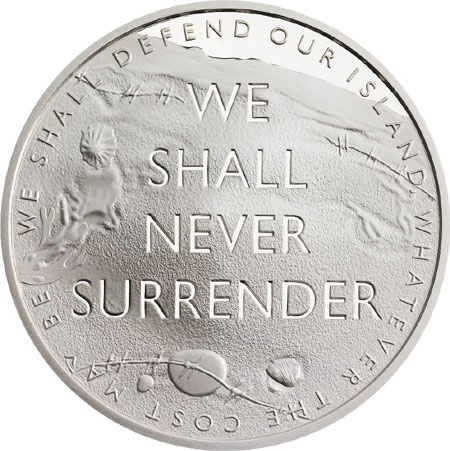 These words are taken from one of Churchill’s most famous speeches to the House of Commons, given on 4 June 1940, during the Battle of France, as he summoned the support of the nation for the ordeal that lay ahead. The quote is surrounded by intricately detailed barbed wire, strewn on a sandy beach. It is all indicative of the horrors that so many faced during the bloody conflicts fought on foreign shores. 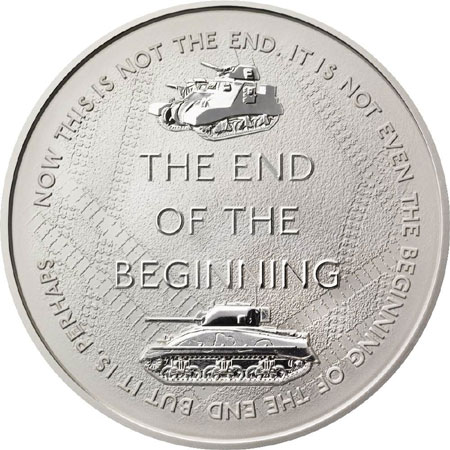 The Battle of El Alamein is considered one of the most decisive battles of the Second World War. It was fiercely fought by both sides, close to the Egyptian coastline, testing the spirits of the men on the ground and that of their leaders. Sensing waning morale among the allied troops, Churchill installed Lt General Bernard Montgomery as leader, and in a notable speech, conveyed the fact that, while the path to victory was still likely to be a long and difficult one, headway had been made. The design of this coin portrays the tire track of a tank, suggesting a sense of the harsh conditions in which many of the battles of the Second World War were fought, and the artillery that was used. 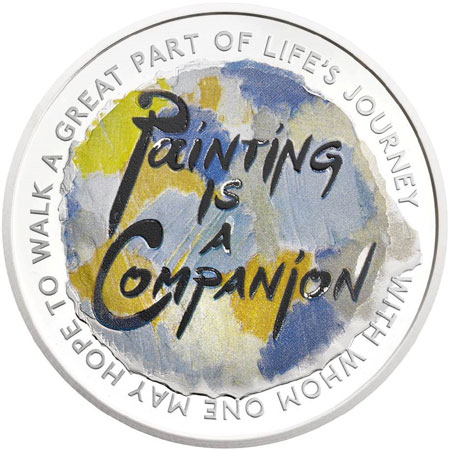 “Painting is a companion with whom one may hope to walk a great part of life’s journey.”

This quote appeared in an essay written by Churchill entitled ‘Painting as a Pastime’, which featured in Strand magazine in 1921. Winston Churchill began to paint when he was in his forties, entering, and winning, painting competitions under assumed names. In 1948 he was made Honorary Academician Extraordinary by the Royal Academy for achievements in the art of painting.

This coin design takes the form of an artist’s palette, with lettering that is suggestive of an artist’s handwritten signature. Tri-chromatic printing has been used on the Silver Proof edition of this coin, to create a textured layer of color on the coin’s surface conveying Churchill’s love of color. 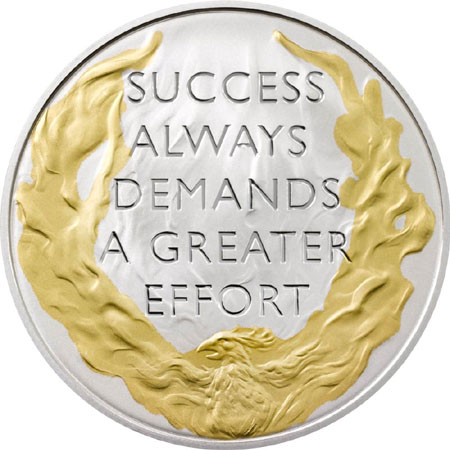 These words were spoken to Robert Menzies, Prime Minister of Australia in 1940. From his command of his country’s troops, and his time as a war correspondent during the Boer War, to his re-election in 1951 after the disappointing defeat of 1945, this coin design captures the perfect analogy for Winston Churchill – the phoenix rising from the ashes, suggestive of his courage and self-belief.

Sir Winston retired from politics in 1955 and embarked on a series of tours and public speaking engagements around the world. Sir Winston coined the phrase “The Iron Curtain” when he described the many governments in Europe who were denying the process of democracy to their people after the war and had predicted the cold war where the ideological and even military battles would be set against the United States and western Europe and the Soviet Union along with its satellite countries. With his death in January 1965 at the age of 90, Queen Elizabeth II granted him the honor of a state funeral, which saw one of the largest assemblies of world statesmen in history.

All coins, produced by the Royal Mint UK on behalf of the Treasury of Alderney are designed by senior Royal Mint engraver Lee R. Jones. Each coin reflects a different well-known aspect of the great man’s persona. The effigy of HM Queen Elizabeth II as designed by sculptor Ian Rank-Broadley appears on each obverse along with the coin’s denomination and year of issue.

This set, a must for any Churchill enthusiast is available in both Proof sterling silver and Brilliant Uncirculated cupro-nickel choices and housed in custom presentation cases.

For more information on the sets, as well as other coins honoring Sir Winston Churchill, please visit this section of the Royal Mint website. Information offered in English – international orders dispatched.