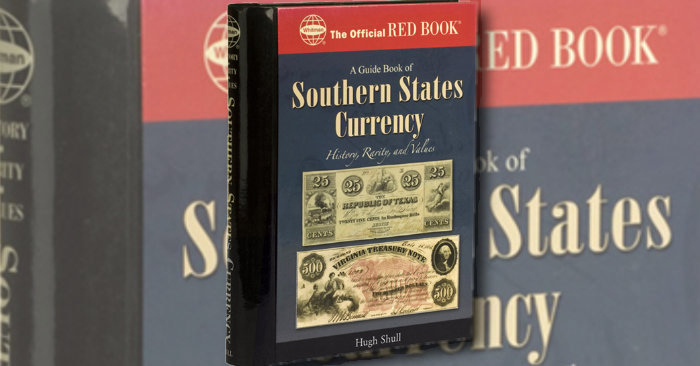 The initial foundation for this book can be traced as far back as my early childhood. When I was seven my father, Cothran H. Shull Sr., passed on to me a collection of old coins that he had inherited from his father. These were in a small tin pickle can along with a folded-up, badly torn, and falling apart 1864 Confederate States of America $5 bill. My coin-collecting interest spiked on and off over the next 48 years. All of those old coins are long gone but I do still have that CSA $5 note—along with the pickle can.

In 1974, after serving four years in the U.S. Air Force, I went to work for a coin dealer in Gulfport, Mississippi, under a GI Training Bill. Up until that time, I had almost no knowledge of and cared very little about the collecting of paper money. Through going to coin shows, and working at the coin shop, that quickly changed. Part of my job was buying and selling CSA notes and Southern States currency at the shows as well as selling through our nationally run ads. I was immediately drawn to these notes for their beauty and terrific history as well as the ornate scenes on each. A love affair with bank notes developed from then on.

During this early period, I was very fortunate to meet Col. Grover C. Criswell Jr., the “Emperor of Confederate and Southern States Currency.” Without a doubt, his reference books and promotional skills helped bring this segment of paper money to the forefront of the hobby for many new collectors. After getting his then-current book on the subject, my interest in and pursuit of these notes was greatly enhanced by the knowledge I had gained.

After about a year and a half, the coin dealer I was working for had to go out of business due to health reasons. During my time there I had met Mr. Graeme M. Ton Jr., of Gulfport, Mississippi, who was one of the leading small-size U.S. note dealers in the country. Mr. Ton not only quickly befriended me, he also gathered me under his wings and started helping mold me into a paper-money dealer. One day he called to put me in touch with another prominent dealer in U.S. obsolete currency, Mr. Don Fisher, of Decatur, Illinois. Don had a deal of about $1,200 worth of CSA notes he wanted to sell. Mr. Ton told him of me and suggested that I buy them. When Don called me I knew right away it was a great deal for the price. Part of it was 50 consecutive 1861 $50 notes (T-8’s) in choice grade. They were in an original envelope from the French consulate in New Orleans—with writings and the seal attached, in French! After agreeing to a deal with Don where I could sell the notes and pay for them over time, I was off and running.

It was that group of CSA notes, a small group of CSA bonds, and a few other miscellaneous notes that served as my first sales offering to collectors in the spring of 1976. It was a simple hand-typed, double-spaced one-page listing on front and back, with one-fourth of it filled with hot air!

During this early period in my career, I met Mr. Austin M. Sheheen Jr., of Camden, South Carolina. He is well known as being the “King of S.C. Paper Money” collectors. He wrote the definitive reference on this subject in 1960 and updated it with his superb 2003 edition. This relationship sparked my interest in collecting South Carolina notes and it has been a very rewarding experience over the years. Austin’s friendship and guidance has been a cornerstone in helping me during my years of being in the paper money business and hobby.

Another person that became a very good friend early on was Dr. Douglas B. Ball of New York City. Having Doug as a friend and mentor was very beneficial as his expertise on Southern States currency was always available when I needed it. His untimely passing was a great loss to all in our field.

Shortly after moving back home to South Carolina in 1977, I met paper-money dealer Thomas Denly of Boston, Massachusetts, who had started his business just prior to the start of mine. We became quick friends and for 30 years he has always been there to share his vast knowledge of paper money and help in any way that he can. (If only he were just a better fisherman!)

All of those mentioned played significant roles in the foundation and development of my career. Their contributions greatly enhanced my being able to write this book and I have very deep feelings for all of them.

As my career blossomed I was very honored to have helped Grover on his 1992 edition of Confederate and Southern States Currency and then again as a co-author on his 1996 Confederate Paper Money. Those opportunities working with Grover gave me much firsthand experience in working on a book of this magnitude!

The collecting of Southern States currency has come a long way since that first meeting with Grover more than 32 years ago. At that time I had no thought of ever writing a book on any subject or following in Grover’s footsteps, so to speak. Had I known then that this project would be mine one day, I’m sure I would have asked him even more questions and been more diligent in my note recordings.


Late in 2004, I started thinking it was really time to get serious on this project, as the hobby really needed a new, updated book. There were three key ingredients I felt were needed to help me do a successful book. The first was the easiest as that was to get good-quality scans in color of as many notes as possible. None of the Criswell material was in color. For this, I asked my good collector friend, Mr. Gene D. Mintz, permission to use his collection of Southern States currency as the foundation for the book. His collection represents the majority of the notes illustrated here. It is without a doubt the finest Southern States collection ever formed. In my opinion, it could not ever come close to being duplicated or equaled! Gene had pushed, prodded, and cajoled me for years to get this book done so he quickly jumped at the chance to get going with the project.

The second ingredient I wanted was a good book writer with excellent computer skills, as neither of these traits are my forte. I called on my longtime collector friend, Wendell Wolka, for this task. Wendell is well known in the paper-money hobby, having authored two books on obsolete currency (Indiana and Ohio). His computer skills in the production of a paper money book are superb. I told him what I was doing and asked for his help, and he readily accepted.

The third and final ingredient was a top-notch publisher. In the spring of 2005 while on a family trip to the beach, it was a visit to one of the big-box bookstores that gave me this piece of the project. While viewing books in the hobby section, I noted that the majority of the reference books there were published by Whitman Publishing, of Atlanta, Georgia. A few months later I had a deal worked out with Whitman and the book was off and running! The Whitman crew has been a real delight to work with on this book.

By the early fall of 2005 Gene, Wendell, and I had spent a week scanning all of Gene’s collection onto discs as well as gathering information to update what had last been done in 1992. Both Gene and I had gathered a wealth of new and corrected information that we wanted to be sure was properly attributed. Without his help, this effort would have been virtually impossible.

After all my years in the business, I called on many collectors and friends for help with their areas of expertise in Southern States currency. This was a tremendous help to us in compiling new information, and all contributors are acknowledged elsewhere in this book. There are many notes in this work that are making their first appearance ever in public. Some notes—such as the 1861 $500 Virginia Treasury Note making its debut appearance in color—make new information available to the hobby. Without all of this generous help, this effort would have been sadly lacking.

Several institutions offered material and scans of notes that have never been available before. In particular, I’d like to thank the DeGolyer Library, Southern Methodist University, John N. Rowe III Collection in Dallas, Texas, for all of its time to get many new scans for the Texas section. The North Carolina Collection, University of North Carolina at Chapel Hill, allowed us to get scans of many of the early North Carolina Treasury notes that had not been done previously. The Arkansas History Commission in Little Rock, Arkansas, allowed us a scan of a fantastic new discovery note that was unknown to the hobby. Both the Oklahoma Historical Society in Oklahoma City, and the University Archives, John Vaughn Library, Northeastern State University in Tahlequah, Oklahoma, were helpful in providing scans and additional information on Indian Territory notes. From Stack’s Rare Coins in New York City (sharing part of the John J. Ford collection) we received color scans for the Indian Territory section along with information that was invaluable in presenting that section. From R.M. Smythe & Co., also of New York City, we received scans of two very rare Indian Territory notes.

The book includes scans of notes that we knew existed but had never seen before. (Several are included here through the courtesy of an anonymous donor and are a cornerstone addition to this book.)

There have been added many small tidbits of information from sources long forgotten. I had many new listings in my files with the information noted but not the source. Now with over two years past, we have this new book to present to the collecting community.

This listing of Southern States currency is far from complete. If you have new notes or information to offer for the next edition please contact me. Without the help of so many collectors and good friends, this book would not be in your hands today. One of the greatest keys to collecting paper money is the knowledge and information we can all share. We hope you enjoy the book and find it helpful to your collecting of Southern States currency.

Q&A: Why is there less color variation in U.S. paper money?